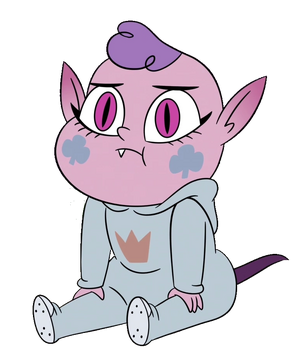 Meteora Butterfly is a Mewman-Monster Hybrid and the long-lost daughter of Eclipsa Butterfly and the rightful heir to the throne of Mewni. Born out of wedlock after her mother eloped with a monster, her very existence disgusted King Shastican, who wanted nothing to do with half-breed child.

Refusing to allow the power of magic to fall into the hands of a monster, the Magic High Commission struck Meteora's name from the Royal Archives and sent her to St. Olga's Reform School for Wayward Princesses, where her true heritage was hidden from her and she was taught to despise her monstrous traits as Miss Heinous, the school's steelhearted disciplinarian. She regains her memories after an encounter with Star Butterfly, causing Meteora to revert to her true form and seek revenge on Mewni for what they did to her.

Age: At least 300 (Eclipsa stated she hasn’t seen her daughter for 300 years)

Powers and Abilities: Superhuman Physical Characteristics, Longevity, Magic, Soul Manipulation, Life Manipulation (The magical beams she shoots from her eyes can rip the souls of others out of their bodies to take them for her own, adding the lifespan of her victims to her own to preserve her youth) | Surface Scaling, 360 Head Rotation, Magic, Transformation, Flight in Mewberty Form, Telekinesis, Energy Projection

Lifting Strength: Superhuman (Was able to tear through a door and carry her mother with ease)

Intelligence: Possibly Above Average (despite Marco’s sarcastic speech, she was able to find a slight clue of why he isn’t technically a princess) | Average as a Baby (While she is a baby and cannot speak, She can understand others fluently and understands things such as Toffee breaking Glossaryck's arm)