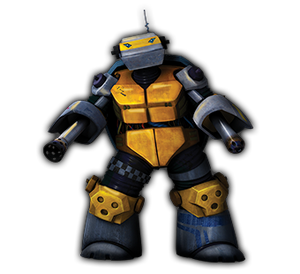 Metalhead is a robotic character that is created by Donatello and, in later episodes, begins to develop a camaraderie with all four of the Turtles. He first debuted in the season 1 episode of the same name.

Attack Potency: At least Small Building level (Far stronger than the Turtles during Season 1 and 2, including Leonardo and Raphael)

Range: Standard Melee range, up to several yards with its weapons

Intelligence: Unknown, was initially controlled by Donatello, but gained articial intelligence that could allow it to adapt to enemy techniques

Retrieved from "https://vsbattles.fandom.com/wiki/Metalhead_(2012)?oldid=5961558"
Community content is available under CC-BY-SA unless otherwise noted.