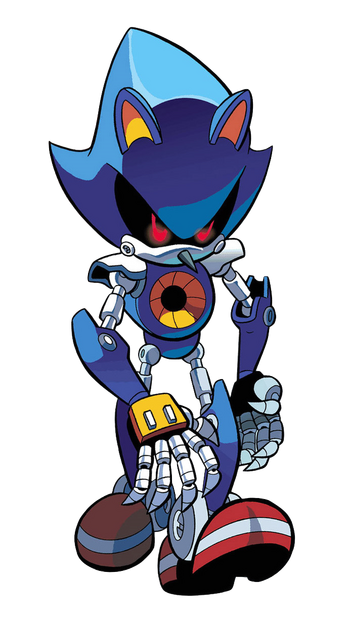 Metal Sonic v3.0 is a a powerful Badnik based on Sonic the Hedgehog that was created by Dr. Eggman to serve as the ultimate match for Sonic, succeeding Robotnik Prime's original Metal Sonic.

Same as before but on a vastly higher scale than before, Large Size (Type 1), Acausality (Type 1)

Attack Potency: Universe level+ (A consistent rival of Sonic, which fought, matched and even overpowered [Alongside Scourge] in some occasions) | Universe level+ (Obtained the data of various heroes to become stronger) | Multiverse level+ (Fought and kept up with Super Sonic and Chaos Emerald-empowered Knuckles and Tails)

Intelligence: Varies. The 3.0 to 3.6 versions of Metal Sonic were described as cold, merciless and mindless drones, which remained silent during the course of battle. The fifth, sixth, and seventh versions were voiceless, and the third model only served as a radio mouthpiece for Eggman. A a voice codex was installed for Metal Sonic v3.7 and onwards along with a more developed personality, a Free will algorithm CPU and a single-minded desire to destroy Sonic.

Weaknesses: Since they were built in order to counter Sonic, the Metal Sonic models are not always designed to take on opponents other than Sonic (This weakness was less present in the latest versions, which remained vulnerable after finishing the V. Maximum Overdrive Attack) | None notable 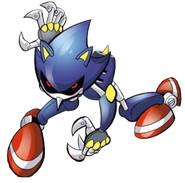 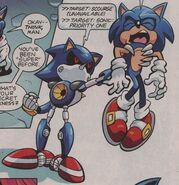 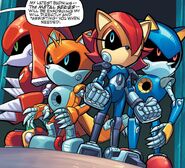 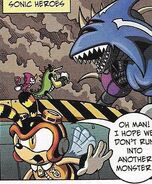 Metal Overlord as seen in the Post-Genesis Wave.
Add a photo to this gallery