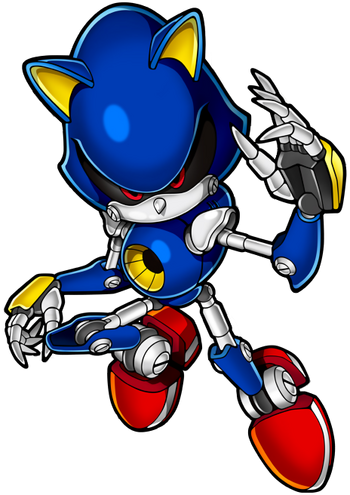 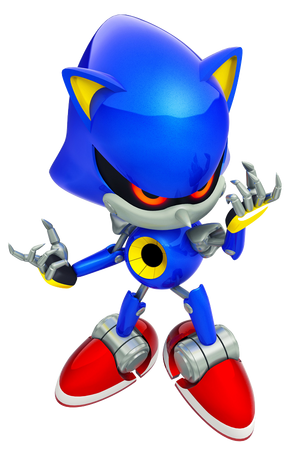 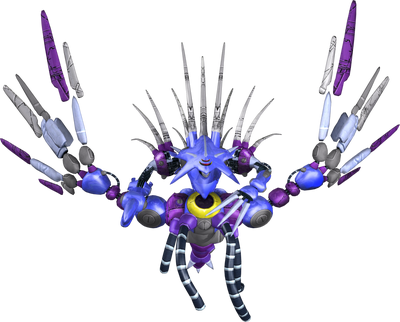 Metal Sonic is the secondary antagonist in the Sonic the Hedgehog series. He is an evil Badnik version of Sonic the Hedgehog and undoubtedly Dr. Eggman's greatest creation, built for the sole purpose of destroying Sonic. It was deployed during Eggman's operations on Little Planet, Metal Sonic confronted Sonic in battle and lost, though he would repeatedly return to challenge Sonic and his allies. Modeled with extreme accuracy after Sonic, Metal Sonic not only resembles his template but can also imitate his moves and achieve velocities matching Sonic's.

Same as before, Acrobatics, Vehicular Mastery, Defensive Aura (While using his boost technique, Metal Sonic creates an aura that coats him and allows him to barrel into enemies and obstacles with no repercussions), Power Mimicry (With Copycat), Space-Time Manipulation, Time Travel, and Dimensional Travel (With Chaos Control), Paralysis Inducement (With Chaos Spear), Forcefield Creation (Also of the fire and electricity varieties), Statistics Amplification (Can enhance his movement speed with Speed Shoes), Invulnerability (With the Invincibility Monitor and by himself with Sonic Boom, which he was capable of copying from Sonic), Limited Telepathy via ESP, Invisibility and Intangibility via Chroma Camo, Shock Wave Generation, Explosion Inducement

Attack Potency: Planet level+ (Created by Robotnik/Eggman to be able to match Sonic in every regard. Regularly upgraded to avoid becoming outdated) | Planet level+ (Comparable to Adventure Sonic), Large Planet level with the Light Speed Attack (Like Sonic and Shadow, the LSA allows Metal Sonic to achieve double the damage it can normally do) | Large Planet level (Remains a rival of Sonic, who defeated Perfect Chaos), higher with the Light Speed Attack | Large Planet level (Copied the others of their Data, including Chaos and later leveled a large portion of Eggman's air fleet flagship to generate the materials to progress to it's next form) | Multi-Solar System level (After combining its Data with the power of Chaos, Eggman believed it to be unbeatable by anything he could plan of, which would include a potential Final Egg Blaster and had doubts that the Chaos Emeralds could match its power. Even when incomplete, three teams of three characters each could do nothing but slow it down; after becoming complete, it was required the combined might of Super Sonic, Tails, and Knuckles to defeat it)

Intelligence: Whatever data it's programmed within base. Gained full sentience and independence as Neo Metal Sonic, after which it overthrew and kidnapped Eggman and set off the entire plot of Sonic Heroes by manipulating 12 characters into chasing and fighting a false Eggman while copying their abilities and data to gain the power to conquer the world and defeat Sonic once and for all

Feats: In base form, Metal Sonic is one of Sonic's most formidable enemies in his universe. Metal Madness was able to easily take on all the base forms, while Metal Overlord had to be defeated by the Super Forms of Sonic, Tails, and Knuckles.

Metal Madness
Add a photo to this gallery