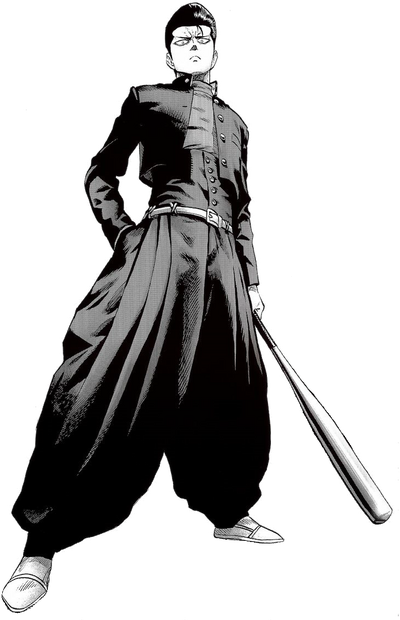 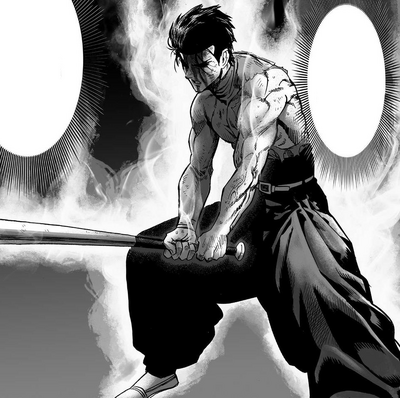 Bad (バッド, Baddo), also known by his hero alias Metal Bat (金属バット, Kinzokubatto) is an S-Class, rank 15, a superhero for the Heroes Association. Despite his low grade, he is believed to be one of the strongest S-Class heroes. He is quite powerful and capable of taking down multiple high-level threats on his own. Despite his brash nature and short fuse, he is revealed to have both a little sister and a cat, both of whom he cares about dearly. After the battle against the Monster Association, he quits the Hero Association and joins the Neo Heroes as a hero. His reason for leaving is still unknown.

Tier: At least High 7-C in base, varies up to at least Low 7-B, likely far higher with Fighting Spirit

Powers and Abilities Superhuman Physical Characteristics, Statistics Amplification (Can become stronger with each hit he takes), Regeneration (Low), and as he turns angrier, Resistance to Mind and Sleep Manipulation (After obtaining Fighting Spirit Rafflesidon's sleep gas no longer was effective on him)

Attack Potency: At least Large Town level in base (Did better against Carnage Kabuto than an upgraded Genos in the VGS, but ultimately stood zero chance in this state), varies up to at least Small City level+, likely far higher with Fighting Spirit (After obtaining Fighting Spirit he one-shot Senior Centipede. Confirmed by ONE that his claims of being able to take on a Dragon level threat to be no mere boast. It is unknown whether Fighting Spirit has an upper limit to its growth, and if so where it peaks out at)

Striking Strength: At least Large Town Class in base, varies up to at least Small City Class+, likely far higher with Fighting Spirit

Durability: At least Large Town level in base, varies up to at least Small City level+, likely far higher with Fighting Spirit

Stamina: Very high (Can fight multiple threats that are Demon and Dragon Class back to back and still keep fighting)

Range: Extended melee range with his bat, dozens of meters with shockwaves

Standard Equipment: His bat. Living up to his name, Metal Bat carries a gray metal bat, which has a black handle. Metal Bat uses his metal bat to take care of monsters. It is, with Metal Bat's strength, strong enough to kill demon class monsters with one hit. It was crafted personally for him when he joined the ranks of the S-Class, and he requested a bat that wouldn't break

Intelligence: Average, however, highly perceptive of the weaknesses of his opponents. (Metal Bat quickly figured out Melzalgald's weakness before any of the other S-Classes)

Weaknesses: Generally brash and reckless. Fighting Spirit deactivates once exiting a battle, and if he has sustained significant injuries he will succumb to them and be left unconscious until he has recovered (It is possible that his Fighting Spirit can recover his injuries, but needs a certain amount of time to do so.) Incapable of fighting in front of his sister

Evergrowing Strength: Metal Bat possesses immense physical strength and has taken out many powerful monsters and villains with a single swing of his bat, including two demon-level monsters simultaneously, including Senior Centipede whose carapace can withstand Genos' Incinerate without being damaged. Even without fighting spirit, he has shown to be able to kill demon-level foes with one swing. While being unable to kill the Elder Centipede with one hit, he did push it down and completely stopped it in its tracks. It's noted that his fighting spirit heightens his strength, as Garou observed that the longer the fight drags on, the more powerful Metal Bat becomes, to the point that he can easily destroy buildings and tear the ground apart, causing powerful shock-waves. Garou even complimented him, stating that if he received even a single strike from the bat, he would have lost the fight. The power of his swing has impressed the likes of Superalloy Darkshine and Bang.

Psychic Resistance: Metal Bat's indomitable will granted him the ability to withstand certain psychic forces and very resistant to others, due to his astonishing willpower known as the Fighting Spirit.

Increased Healing Factor: Metal Bat possesses the ability to recover from minor blood loss and fractured bones in a matter of days just by resting.

Killing Moves (Viz: Killer Moves): Metal Bat usually fights by bashing his opponents into submission or death with his bat, not unlike a typical delinquent. However, if there are opponents who can either withstand them or evade them, he swings his bat at different intervals and in unorthodox ways to be able to strike them down. Among his array of moves, he also has ones made and used to finish off his opponents. Garou judges Metal Bat's overall fighting style like the one of an amateur.

Fighting Spirit (気合い, Kiai): Metal Bat is capable of getting stronger through his damage intake, and anger build up. This is because of his will to continue to fight regardless of what happens. Instead of succumbing to the damage he receives, Metal Bat gets an increase in his physical attributes. This ability is mainly shown during his fight with Garou, wherein he got both more durable and stronger as the fight went on. However, his Fighting Spirit lowers extremely fast when he is out of battle and exhaustion can quickly set in.

Keen Perception: Despite his brash nature, Metal Bat seems to be very alert, as he was the first one to discover Melzalgald's weakness. Besides, he was able to notice that Elder Centipede avoided getting his head in contact with Metal Bat's attack and thus deduced that its unprotected face is its weak spot. Metal Bat was born with amazing dynamic vision