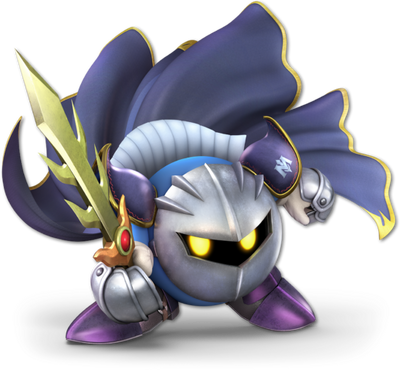 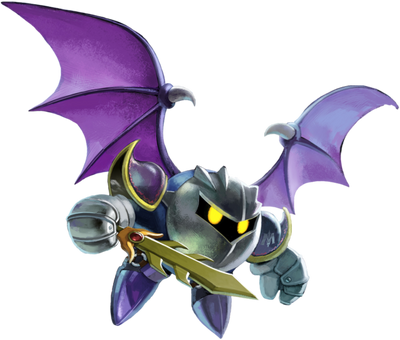 Meta Knight is an enigmatic fighter with a mask who appears as a consistent rival to Kirby throughout the series. His origins are shrouded in mystery as are his motives, appearing as an impediment in Kirby's progress in some games but serving as a steadfast ally in others. What has remained constant is his deadly skill with a blade along with a tendency to flee when his mask is broken, revealing a face not unlike Kirby's.

Classification: Referred to as a puffball, The Lone Swordsman, Star Ally, Scourge of Darkness

Superhuman Physical Characteristics, Master Swordsman, Flight & Spaceflight, Natural Weaponry (Always hits foes & cuts things reached by his wings when flying. His non-canon portrayal in Super Smash Bros. can actively use his wings to hit others), Vehicular Mastery, Self-Sustenance (Type 1), Longevity, Immortality (Type 3), Toon Force, Regeneration (Mid. Like all Star Allies, he can quickly recover from being crushed flat, as well as having no notable damage after fighting Flamberge, who can impale and trap many foes at once like a shish-kebab using a sword covered in fire, before tossing them as projectiles surrounded by fire. Recovered off-screen from being turned into a cyborg and defeated in battle in a brief period of time), Enhanced Senses (Able to travel in dark territories), Can turn into a small ball of intangible energy, Can harm intangible beings and souls, Teleportation, Healing (Can fully heal himself and an ally via Heal), Fire Manipulation, Electricity Manipulation, Air Manipulation, Darkness Manipulation, Energy Blasts, Statistics Amplification (Speed Augmentation via Meta Quick & Heal), Summoning (Via Knight Call & Meta Knightmares. His sword, Galaxia, can fight on its own, summoning meteors to attack), Duplication, Attack Reflection (Deflected 3 energy balls from Magolor. By hitting attacks, he can make them travel back into his foes, homing into them in the process), Homing Attack, Explosion Manipulation via Meta Knightmares, violin dexterity (Shown in official art)

Resistance to Transmutation (While he has been transmuted several times, he always kept his consciousness and at least basic functions such as when he could still use his sword while turned into a limbless ball), Existence Erasure (Can get hit by Drawcia's deletion wave and survive), heat (Can travel to Hotbeat, a planet resembling a star, and be unaffected by its temperatures), Gravity and Radiation Manipulation (Able to outrun, outfly and withstand black holes from Sphere Doomers, Master Crown-powered Magolor and Marx [The latter shown Post-Star Allies]. Notably able to briefly outrun, outfly and survive a black hole that was warping & sucking all the space of the shown battlefield, including stars in the background of it, and can survive fine being near and getting sucked inside a black hole that was rotating stars and a nebula), Spatial Manipulation (Physically unaffected by said interstellar distortions and the sudden return to normal space has when Magolor Soul's black hole ends, otherwise only harmed if sucked by it or reached by any space-based attack from Magolor; also unaffected by constant interstellar distortions in battle)

As before, Empathic Manipulation & Morality Manipulation via Friend Hearts (Can turn enemies into allies. Able to overwrite Void Termina's effects on allies; Scales to his multi-galactic potency), Healing (Friend Hearts can be used to heal and purify others. Can "Revive" defeated allies, who are merely unconscious), Purification, Power Bestowal (Turning targets into allies via Friend Hearts gives them that same power. Can bestow individual elemental powers when using them himself), Cloth Manipulation, Magic, Resurrection (Able to revive others via Revival Spell), Able to combine powers with allies to enhance elemental attacks (Also gaining access to Ice Manipulation and Water Manipulation), Creation (Able to help other Star Allies create Friend Stars and the Star Allies Sparkler)

Resistance to Transmutation (Like all Star Allies, he isn't transmuted after being cooked inside the pot of Chef Kawasaki or Cook Kirby's, a process that regularly turns foes and items into food), Empathic Manipulation & Morality Manipulation (Became unaffected by the presence of the individual Dark Hearts after having similar powers bestowed to him)

Speed: Massively FTL+ (Repeatedly shown as equal, if not slightly faster than Kirby, who kept up with Dark Matter, who flew past 8 galaxies in 7 seconds [3606645657144.202c.]. His flight and reactions kept up with the Warp Star and other comparable vehicles during Air Ride, could fly and maneuver at speeds seemingly equal to that of the Warp Star in Super Star Ultra and kept up with it in Return to Dreamland's opening; Can quickly react & dodge to obstacles while flying and keep up with those who can react, dodge, clash and keep up with him while flying. Able to keep up with Void Termina, who kept up with the Star Allies Sparkler, an improved version of the Warp Star. Quickly able to fly from a planetoid near Nova's summoning point, at galaxy's end, back to Popstar, which is at the edge of the universe. Shown flying at faster than light speeds several times. Repeatedly outran waves that were consuming interstellar parts of Another Dimension, which were moving fast enough to get past stars and nebulae in the background, as well as keeping up with the Lor Starcutter and Landia, the latter of which he kept up with in combat. Along with the other Star Allies, he can chase and keep up with the Jamba Hearts several times, which were suddenly scattered across the universe. Able to move even faster via Meta Quick, Heal or with Invincible Candy, Boost Orbs & Power-Up Hearts for a limited amount of time)

Lifting Strength: Likely Class Y (Comparable to Kirby, who defeated and is vastly superior to Star Dream in its Nova form)

Range: Standard melee range with his sword, Interstellar with projectiles and shockwaves

Standard Equipment: His sword Galaxia, his Dimensional Cape, which allows him to teleport and cover the area with darkness

Intelligence: Genius. Built the Halberd, a futuristic ship with enough power to harm Kirby and a speed possibly superior to him. Meta Knight is a capable leader, having the utmost respect and loyalty of his army of Meta-Knights, with whom he tried conquering Dream Land once to put an end to their lazy lifestyle, presumably only failing due to Kirby's intervention (as Meta Knight alone is repeatedly shown as superior to everyone there besides the Pink Puffball). He is a swordsman of the highest caliber, deftly swinging Galaxia in a flurry of slashes, giving no quarter to even the strongest of foes and using high-speed moves. He's able to assist in the defeat of opponents as experienced as Hyness and Void Termina, as well as defeat other experienced foes such as a clone of Queen Sectonia and Galacta Knight. In combat, he can incorporate some throws into his arsenal, picking up enemies and tossing them into the ground, he can also be seen sending his opponents' attacks and projectiles back at them

Weaknesses: Meta Knight prefers chivalrous combat, often refusing to fight his foe if they have no means of fighting back, such as a sword. He flees when his mask breaks for unknown reasons. He sometimes seems to need to defeat or at least clobber his foes for a time before using his unique abilities. Many of his powers require him to use his sword

Galaxia is Meta Knight's sword, being notably more powerful than other blades in the verse and giving access to the owner several powers, including many different tornado attacks, elemental manipulation, and various other diverse abilities. Galaxia also seems to be sentient, being able to fight on its own. Other characters like Kirby and Magolor Soul have imitated Galaxia when generating their swords, presumably to assimilate its might.

Thanks to Galaxia, Meta Knight can freely use special moves during his battles. When he's a playable character, using this moves cost him points he has to collect or gain via defeating foes; This is due to Game Mechanics, Galaxia itself has even been stated to have "unlimited power." This list also covers similar and powerful moves he doesn't normally have access to use.

It starts growing in size after being picked up and explodes by itself if held for too long.

When collected, Meta Knight becomes invincible for a short time, and almost any enemy he touches will be instantly defeated, or at least damaged.

The character holding it cannot fly or float with it. As long as it is being held, its carrier is both invisible and intangible. The Invisibility Stone will respawn in its original place if destroyed. It only lasts for a limited time and flashes red when it is close to expiring.

A vehicle that Meta Knight can use, its charge attack is a powerful dash attack.

Called "Lobster Tank" by fans. Another vehicle that he can use, its charge attack is a powerful electroshock that comes from its mouth area.

The Final Weapon in Star Allies, used to take out Void Termina. The Star Allies Sparkler fires projectiles from the tip, fly around quickly and efficiently and spin counterclockwise to avoid all damage on a relative scale (Sparkler Turn). Kirby canonically took the lead in the center of the Sparkler while his friends rode in the tail. Still, the leader can be rotated to imbue the shots with a different element depending on the leader (the technique is called Rider Switch). The Sparkler can fire different homing projectiles with varying power depending on charge time. An uncharged shot is called the Sparkler Comet, and it fires a star-shaped projectile. A charged shot is called the Sparkler Starshot, and it fires a projectile shaped like two intertwining stars. The strongest attack is called Team Star Allies!, which, if everyone who's riding charges together and releases at the same time, fires a giant laser at the opponent. Meta Knight uses this item on his own when used in The Ultimate Choice of Star Allies.

Galaxia Darkness as it appears in Super Smash Bros. for Wii U

The inside of Meta Knight's cape in Super Smash Bros. for Wii U

Meta Knight, made out of yarn in Extra Epic Yarn.

Super Smash for Bros. for Wii U, Meta Knight's specials

Galaxia Darkness's trophy in Super Smash Bros. for Wii U

Pit (Kid Icarus) Pit's Profile (Both were 4-A, Optional Equipment was allowed, Speed was equalized)

Luigi (Mario Bros) Luigi's Profile (Pre-Star Allies Meta Knight was used, both had all equipment, and speed was equalized)

Kirito (Sword Art Online) Kirito's Profile (Speed was equalized, both were bloodlusted, 4-A keys were used)