Name: Messenger of the Seafolk

Gender: Unknown (Male-like in appearance and was given a male voice in the anime)

Attack Potency: Wall level, likely far higher (In spite of being designated a Wolf-level threat, it could be much stronger than this since it wasn't there to cause any damage and simply to leave a message)

Lifting Strength: At least Class 25 (Should be comparable to a fellow smaller seafolk who can casually lift a trailer truck)

Range: Tens of meters via size 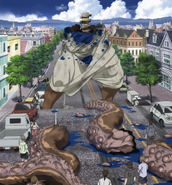 Off-screen demise
Add a photo to this gallery

Start a Discussion Discussions about Messenger of the Seafolk