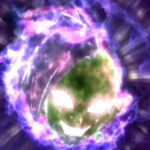 You aren’t dealing with the average Zamasu Chan any more...