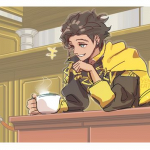 aka Triforce or TP1

Hi User, ask here and I’ll answer as soon as possible; if you want to PM me, my fanfiction account is called TriforcePower900. Remember to say here that you sent a PM, as I don't regularly check my ff account.