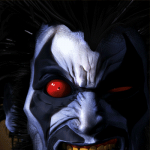 4-B Bracket: Brains vs Brawn!

Think you know about any of those topics? Feel free to check them out and add your takes to them!