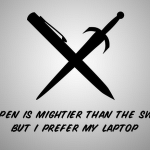 The pen or the sword

Whelp, this is the first time I've used this greeting thing before might as well start now. Basically I'm taking a break from this wiki for the next month or so. While I greatly enjoy spending time on this site, its also been draining to me and Ive come to the conclusion Ive been spending to much time here and its drained me of my passion.

I love reading and writing but I haven't been doing nearly as much of either of those lately due to the time I spend here. So apologies if you were trying to contact me, feel free to leave a message below and I promise to read them all upon my return. If your reading this I hope you have a lovely day!

← You did not specify any title
Loading editor
Newest threads