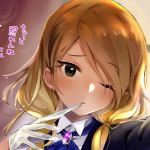 Welcome to my message wall! Make sure to make the topic of your message as clear as possible so I know what you want.