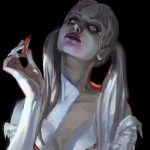 I don't got anything creative to say here.

If you see a thread I might be interested in, or just wanna get my attention for whatever reason, this is the place to go. Yeah. (Note: If you've come intending to message me about The Dark Tower, kindly refer to this.)

P.S.: That there music you're about to play is the song "Crushing" by Australian solo artist Isserley. You can find the entire album it comes from here.

Seriously, go listen to this album.