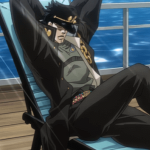 Welcome! I'm just a guy who happens to be an expert on researching, debating about certain topics, various franchises & verses, and powers & abilities. I'm also a Nintendo console & PC gamer. I'm usually active in Discord, Google+, and on this wiki. In my blogs, you will mainly see either Respect Threads or improvements on specific pages I will be using for a different wiki which has yet to be revealed to the public (only the Owner can give the permission for their wiki to be revealed (when its completed) at anytime they please or feel comfortable doing so).