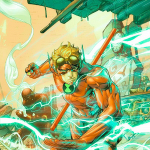 Hi there, if you want to discuss The Flash, Sonic, Ben 10, Dragon Ball, Pokémon, Generator Rex and a bunch of other verses, then I'm your guy.

Time and dimensional travel also fascinate me so feel free to ask me about anything that deals with them.