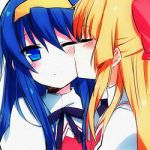 "If there is light and dark, or rather good and evil, all I want is to dwell in the neutrality that mixes both."

"If you are your own worst enemy... You can also be your greatest ally. Realizing that, the fated path opens."
Add a photo to this gallery