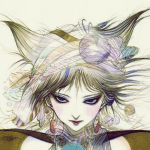 Welcome moon and star. Come to me through fire and war.