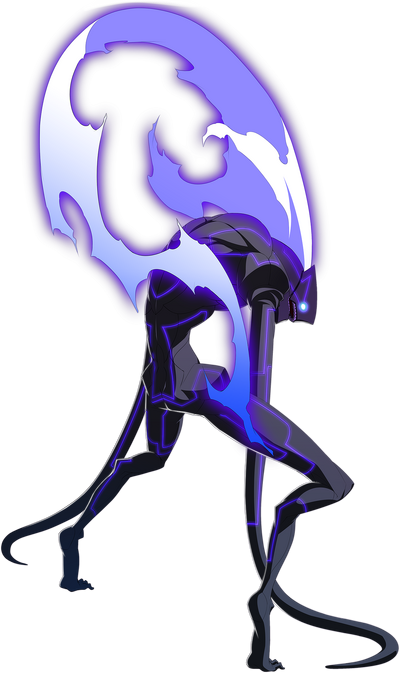 Merkava is a playable character in Under Night In-Birth. He was once a human who desired to become a Re-Birth, but was consumed by the power of EXS and became a Void instead. Unlike most Voids, Merkava retained his consciousness and the ability to talk, albeit telepathically. He now actively hunts for the EXS his new body craves, willingly killing anyone he needs to to get it.

Though he's a Void, Merkava shows signs of humanity in his speech, and even thanks those who try to reason with him. He dislikes his life, going as far as to call it a curse, though he does like the power that comes with it.

Powers and Abilities: Superhuman Physical Characteristics, Skilled melee fighter, Stretchy Arms, can morph his arms into tentacles and wings, Flight (Via wing arms), Non-Physical Interaction, Enhanced Senses, can charge his hits with dark energy, can breathe purple fireballs, can turn his hands into snakes that attack the enemy, Regeneration (Low-Mid), can temporarily increase his strength with Veil Off, Telepathy, Immortality (Types 1, 3, & 5), Nonexistent Physiology (Type 1. Void are beings who lack EXS/Existence. Voids are unable to interact with the normal world unless there are high concentrations of EXS, nor can they be perceived. Described as the "Beast of Nothingness). Existence Erasure (Can devour one's EXS/Existence), Passive Madness Manipulation, Fear Manipulation, Paralysis Inducement and Corruption (Type 3; Even so much as looking at a Void can cause one to lose their sanity and will eventually turn them into a Void. Voids induce fear and paralysis just by existing), Soul Manipulation (Voids can devour souls), Invisibility (Voids cannot be seen by other people outside of high concentrations of EXS or if said person is an In-Birth), Extrasensory Perception, Spatial Manipulation, Void Manipulation, Power Bestowal, Self-Sustenance (All types), Stealth Mastery, Multiple Personalities, Perception Manipulation, Absorption, Pain Manipulation, Non-Corporeal, Resistance to Existence Erasure (Can take hits from Hyde and not be erased from existence), Disease Manipulation, Paralysis Inducement, Fear Manipulation, Madness Manipulation (Type 3) and Extrasensory Perception (Could attack Linne with a move she could not sense).

Weaknesses: Dislikes his life, requires EXS to survive, though his immortality makes him nearly unkillable he can be killed if his EXS is ripped apart 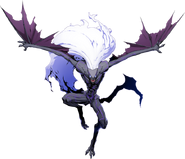