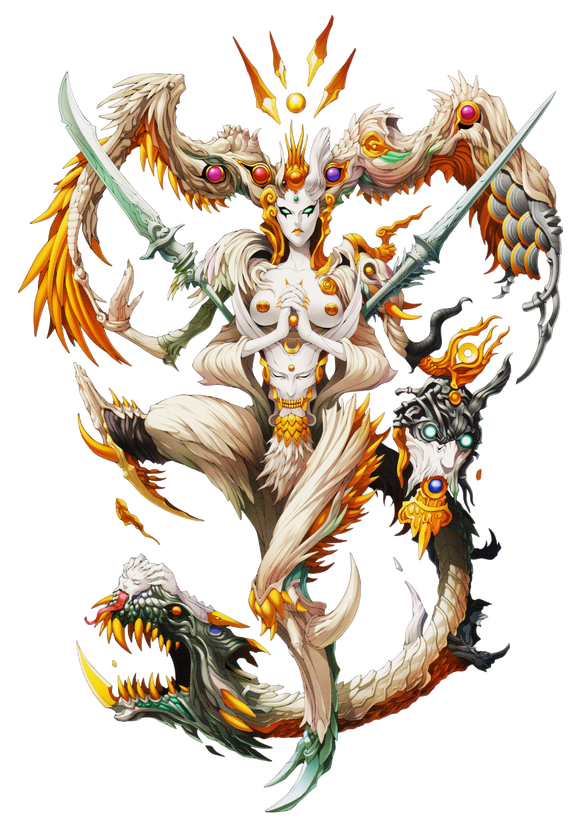 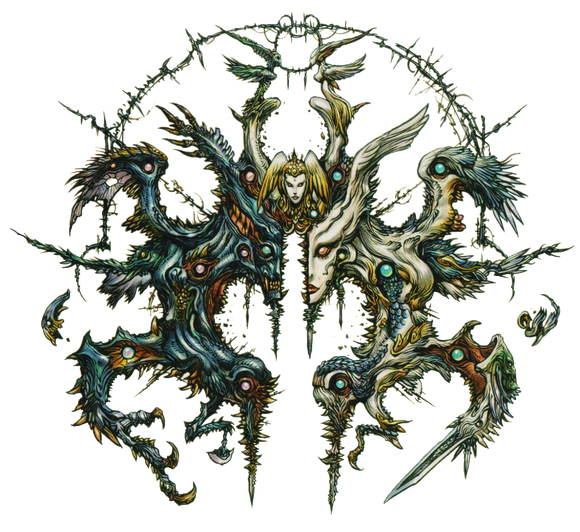 Merkabah is the throne chariot of God. It is a four wheel vehicle driven by the chayot which are living creatures with four wings and four faces. According to Ezekiel it is a chariot made of many angels driven by the "likeness of man". Merkabah is made of many Ophanim, Seraphim, and Chayots. In Shin Megami Tensei IV: Apocalypse, it is formed after the four Archangels merge to confront Lucifer.

Name: Merkabah, the Chariot of God

Gender: Genderless. Merkabah is a fusion of both male and female entities, and his body has characteristics of both genders in spite of being referred to as a Male

Age: Inapplicable, exists beyond all of time

Classification: Fusion of The Four Cardinal Archangels, Aspect of Satan

Powers and Abilities: Superhuman Physical Characteristics, Higher-Dimensional Existence, Abstract Existence (Type 2), Immortality (Types 1, 3, and 8. Can return to The Axiom to reform indefinitely), Regeneration (High-Godly. Capable of regenerating after being erased from nonexistence alongside the entire multiverse across past, present and future), Acausality (Type 4. Demons are naturally born in a world beyond time and do not perceive it linearly, being completely unaffected by the collapse of the multiverse across past, present and future), Non-Corporeal (As a Demon, Merkabah is not a physical being, and is a thought-form made of pure information and data), Reality Warping, Space-Time Manipulation (Demons of Merkabah's caliber are capable of maintaining the existence of the very concept of time across infinity, and of overwriting universes and their past and future with new ones containing different laws. Scaling from Polaris, who is capable of rewinding and administrating time on a multiversal scale, affecting even voids of complete nothingness which consume concepts and ideas), Law Manipulation, Matter Manipulation, Soul Manipulation (Demons are capable of destroying souls with normal attacks, as well as absorbing them and collecting the populations of entire cities to turn them into energy), Life and Death Manipulation, Causality Manipulation, Information Manipulation, Power Nullification (Completely nullifies all statistics amplifications from all foes with Dekaja), Conceptual Manipulation (Type 2. Scaling from lesser entities capable of administrating all concepts that comprise the world and define it's past, present and future as if they were merely Information on a computer program), Void Manipulation and Non-Physical Interaction (Characters far weaker than the Demiurge can completely destroy beings of nothingness with nothing but normal attacks, and control the primordial void of nothingness that consumes and erases everything that comes in contact with it, even concepts and the Information that comprises reality), Elemental Manipulation (Lightning and Wind Manipulation), Light Manipulation, Holy Manipulation, Teleportation, Telekinesis, Telepathy, Energy Manipulation, Mind Manipulation, Forcefield Creation (Capable of creating shields which repel both physical and magical attacks), Statistics Amplification and Reduction, Resistance Negation (Can cast Almighty Attacks which bypass all magical defenses and innate resistances), Omnipresence, Nigh-Omniscience, Shapeshifting, Transformation (Capable of evolving into a stronger second form), Fusionism, Dimensional Travel (Capable of acting as a gateway to higher planes of reality, and powerful Demons, in general, are capable of traveling throughout different multiverses and planes of reality), Resistance to Conceptual Manipulation, Death Manipulation with Hexagram

Attack Potency: At least Multiverse level+, possibly Low Complex Multiverse level (Merkabah is powerful to the point where the combined might of the Four Cardinal Archangels was insufficient to form him, forcing Jonathan to give his own life to enter martyrdom and fuse with them - Merkabah should thus be far above the combined power of the Cardinal Archangels, which threatened to destroy the entire Multiverse and far outclassed even Metatron's strength. Comparable to Lucifer, who at that point merged with Walter and became vastly stronger than all of his previous incarnations, going as far as saying he reached "his truest form as a Demon Lord" and as "the one equal to God")

Durability: At least Multiverse level+, possibly Low Complex Multiverse level. Although his nature as a Demon makes him extremely difficult to kill (Demons are abstract entities of Data that conceptually embody phenomena of nature, and their ties with mankind and with The Axiom makes them capable of regenerating even after the Multiverse has been destroyed across all points in time and if humanity has never existed in the first place, and renders them incapable of being killed even by beings such as YHVH)

Intelligence: Nigh-Omniscient. Exists throughout all of time simultaneously, and perceives it's ebb and flow from the beginning to the end and vice-versa – Being the fusion of the Four Cardinal Archangels who lead the army of God and a skillful samurai, Merkabah should presumably be an extremely skilled warrior