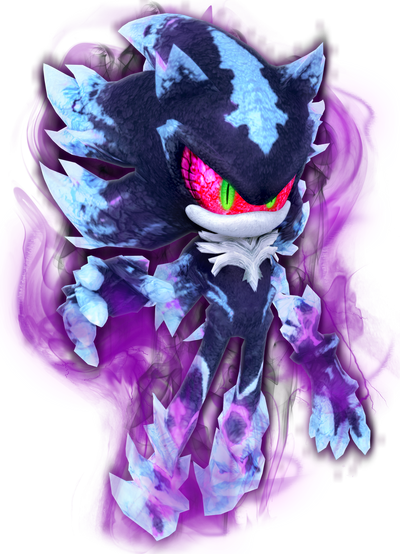 Mephiles the Dark is one of the primary antagonists in Sonic the Hedgehog (2006). He is the malevolent conscience, mind and will of the sun god Solaris. Mephiles was born during the Solaris Project when the experiments on Solaris split him into Mephiles and Iblis. After his birth, Mephiles was sealed inside the Scepter of Darkness by Shadow the Hedgehog, but was freed ten years later during a skirmish between Shadow, Rouge and Dr. Eggman.

After his release, Mephiles orchestrated a centuries-long plan to release Iblis from Princess Elise and rejoin with it. Along the way, Mephiles attempted to sway Shadow to join him, but failed. Ultimately, Mephiles' plan succeeded when he killed Sonic the Hedgehog. He then reemerged with Iblis, remaking Solaris, but was defeated by Sonic, Shadow and Silver, and subsequently erased from existence.

Gender: Genderless, but referred to as male, as he copied the body and features of Shadow, who is a male character.

Attack Potency: Large Planet level (Was able to beat Shadow with one strong hit, later fought him alongside his partners and one-shotted Sonic)

Speed: At least FTL (Could keep up with an "inhibited" Shadow and his partners in combat)

Range: Standard melee range. Hundreds of meters with his attacks and abilities

Intelligence: Genius (Was able to manipulate the entire cast of Sonic in a gambit to restore himself to Solaris)

Weaknesses: As a being of darkness, Mephiles is vulnerable to light-based attacks, which renders him immobile 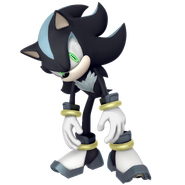 Mephiles after copying Shadow's appearance in the American and PAL version. 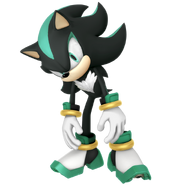 Mephiles after copying Shadow appearance in the Japanese version.

Mephiles after fusing with his own Shadow Clones.
Add a photo to this gallery

Start a Discussion Discussions about Mephiles the Dark