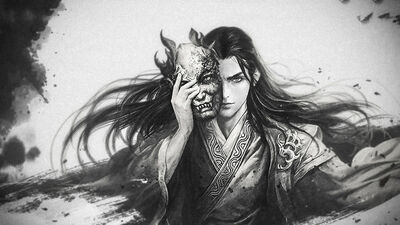 Meng Hao is the protagonist of the Chinese Xianxia Novel "I Shall Seal the Heavens". He was once a young scholar in the Yunjie Country, who failed the imperial exams three times. Sitting on Mount Daqing he was kidnapped and brought to the Reliance Sect, and so his path of Cultivation began.

After some time in the Reliance Sect, Meng Hao acquired the legacy of the League of Demon Sealers becoming the Ninth Generation Demon Sealer.

Origin: I Shall Seal the Heavens

Age: 16 at the beginning, several hundred years when at the peak of the Realm.

Attack Potency: Likely City level (Should be comparable to Qi Condensation Wang Lin. Was stated to have enough force to topple a mountain) | Country level (Defeated an Early Core Formation cultivator) | At least Multi-Continent level (Can easily kill Nascent Soul Cultivators), Moon level with Agarwood (It's a summon on the level of Patriarch Huyan and the Blood Mastiff), Large Star level with Immortal Sword Qi (It can slay Peak Dao Seeking/Demigods) | At least Moon level (Is comparable to 2nd Spirit Severing Cultivators). Large Star level with Immortal Sword Qi and Heavenly Blade | Likely Large Star level (Could fight on par with Peak Dao Seeking Cultivators), far higher with Mist Blade (Can kill True Immortals with it) | At least Large Star level (Halted the rotation of planet South Heaven, which is far larger than our sun. Opened the Door of Immortality, which greatly dwarfs planet East Victory), likely Solar System level via Dharma Idol (Had the power of a Stage Ten Immortal, so he should be comparable to Late Celestials from A Will Eternal), far higher via Terracotta Soldier. At all stages, can ignore conventional durability in various ways

Stamina: Extremely high. Has no need to sleep or rest, unless extremely injured. Can fight for months nonstop.

Intelligence: Extraordinary Genius. Often understands complex magical techniques in record time, is adept at manipulating and conning his opponents, and has knowledge on more than a billion types of plants and vegetation.

Weaknesses: Cannot fly for extended periods of time, or without items | Cannot absorb the energy of Heaven and Earth, and his Violet Pupil Transformation drains his longevity | Same as Foundation Establishment, and can also possibly lose control of his Neo Demon army | His Anima transformations drain his longevity | None Notable | His Terracotta Soldier can't stay outside the Fang Clan's Holy Land for too long.