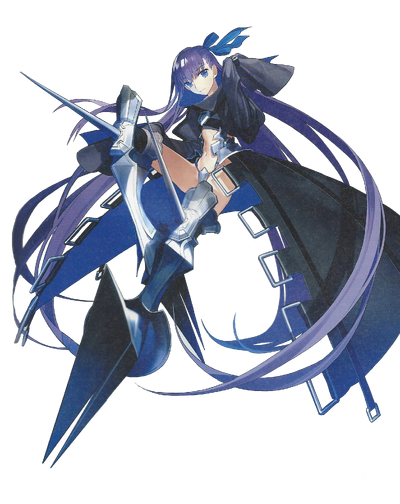 Alter Ego S, whose True Name is Meltlilith, is an Alter Ego created by BB. A "High-Servant" created from the data of the goddesses Artemis, Lotan, and Saraswati, Meltlilith presides over things that flow while possessing an extremely domineering personality, assimilating anything that stands against her own appreciation of herself.

She later reappears as an Alter Ego-class Servant that Ritsuka Fujimaru of Fate/Grand Order can summon in their quest to resolve the singularities created throughout history.

Age: A few months at most

Powers and Abilities: Superhuman Physical Characteristics, Mind Manipulation, Water Manipulation, Air Manipulation (likely far more via Meltout. She can control anything that "flows", including thoughts, water, wind poems, speech, and music), Vehicular Mastery, Animal Manipulation, Servant Physiology, Explosion Manipulation, Aura, Conceptual Manipulation (her Melt Virus can affect abstract ideas, such as skills and thought and can control all that flows via Saraswati's Authority), Poison Manipulation, Energy Projection, Energy Manipulation, and Transmutation (Can turn beings into pure energy, and absorb that energy as EXP), Intangibility (Her body is composed of Phantasmagoric Liquid, making many conventional attacks simply pass through her), Expert Hand-to-Hand Combatant, Absorption (Can melt anything, physical or immaterial, and absorb it into herself, granting herself the experience, power, and capabilities of her victims), Resistance Negation (Melt Virus works on Servants despite all of them resisting Data Manipulation), Rage Power (Becomes more aggressive and sadistic as the battle continues, raising her attack power at the cost of her defense), Disease Manipulation, Size Manipulation (The Melt Virus is considered a disease, and can change the size of the target to being "nano-sized"), Durability Negation (The poison of Melt Virus works from the inside first then the outside last. It melts the mind/psyche of the target, and the soul), Law Manipulation, Time Manipulation (She overwrote a basic rule in the Mooncell that dealt with "The passage of time" to make herself invincible), BFR, Pocket Reality Manipulation (She can send targets into another reality that is within her "heart), Empathic Manipulation (Can cause the heart to feel a certain emotion by her control over music), Statistics Amplification (By using her Melt Virus to earn Exp, and level up), Acid Manipulation (Via Melt Virus), Power Nullification (Can nullify skills with Melt Virus by using it as a shield), Reactive Power Level (Can turn anything organic, inorganic, tangible, or intangible, such as skills, thoughts, etc, into EXP with All Drain/Melt Virus, allowing her to progressively get stronger in battle), Damage Boost, Acausality (Type 1), Supernatural Luck, Minor Fate Manipulation (Servants with B-rank Luck or higher can change their own fates to evade inevitable outcomes such as having their hearts destroyed by Gáe Bolg), Resistance to Matter Manipulation, Information Manipulation, Probability Manipulation, Time Manipulation, Spatial Manipulation, Gravity Manipulation, Reality Warping, Causality Manipulation, Life Manipulation, Death Manipulation, Fate Manipulation, Probability Manipulation, Law Manipulation, Power Nullification and Illusion Creation (As a sublimation of various Goddesses, she has access to their Authorities) | All previous in addition to Reality Warping (Can overwrite physical laws with those of her own design), Invulnerability ("Hit Detection" does not exist for Meltlilith, rendering any direct attack useless), Resistant to Statistics Reduction within her own "heart"

Speed: Massively Hypersonic (Has the highest possible Agility rank amongst Servants and has no problems keeping up with Hakuno's Servant even after being severely weakened) | Massively FTL+ (Is considered a threat to BB)

Durability: Island level (Although she only has E-Rank Strength, she matches Servants as strong as Nero and Archer in close combat) | Multiverse level+

Intelligence: Meltlilith is the most aggressive of the Alter Egos, dominating her foes in close combat with her mastery of her bladed legs and her frequent usage of her signature Melt Virus. To this end, she pragmatically renders "hit detection" against her impossible in order to secure her own victory along with her own superior power. In addition, she has the combined mental faculties of every being she has ever absorbed, allowing her to process vast amounts of information with ease. However, her aggressiveness and sadism have made her reckless, which led to her downfall once BB annulled her invulnerability as well as when she absorbed Shinji without considering whether or not he had infected himself with a virus before her arrival, weakening her to the point that Hakuno's Servant could defeat her

Weaknesses: Meltlilith is extremely arrogant and domineering, seeing others as simply foreign objects that she is to absorb. Her aggressiveness increases to the point of recklessness if the battle lasts long enough due to her Sadistic Constitutions. Her powers can be crippled by a sufficiently powerful and complex computer virus. She almost completely lacks a sense of touch | Her invulnerability can be undone by an opponent whose ability to manipulate the physical laws is greater than her own

Saraswati Meltout: Benzaiten's Five-String Biwa: Meltlilith's Noble Phantasm, derived from the Hindu goddess Saraswati and the Japanese Buddhist goddess Benzaiten, who preside over knowledge and the arts. With their authority, Meltilith is able to control anything "that flows", whether it be natural phenomena like wind and water, or man-made concepts like speech, prose, and music. This takes the form of the massive vortexes that Meltlilith creates as she battles as well as the "honey" she secretes for her Melt Virus, she is able to wash away her foes' body, common sense, morals, mind, society, and civilization to such an extent that it would be classified as an Anti-World Noble Phantasm rather than Meltlilith's preferred use of it as a targeted attack.

In the setting of Fate/Grand Order, it has been reclassified as an Anti-Unit Noble Phantasm upon Meltlilith's summoning as an Alter-Ego class Servant and due to no longer fighting in the Cyberspace. In this iteration, Melt instead summons a torrent of water around her target as she dashes towards them at high speeds where she meets them and attacks with a flurry of ballet-like spins before ending it with a fatal straight kick of her bladed legs.