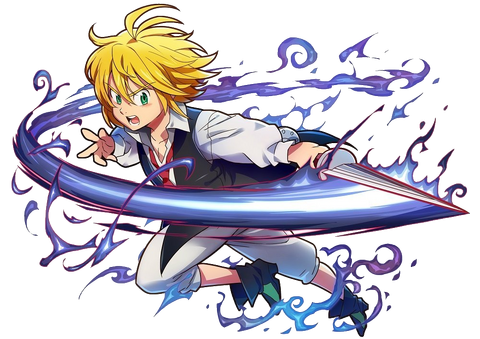 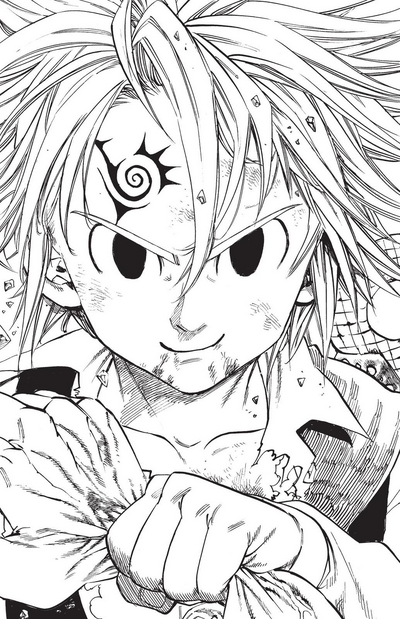 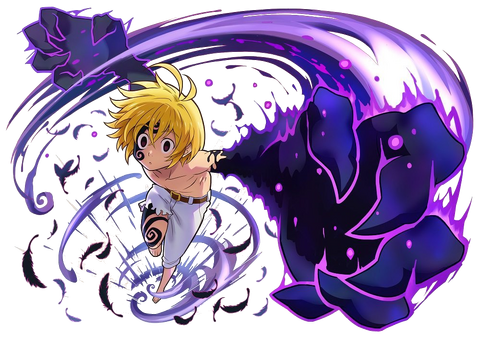 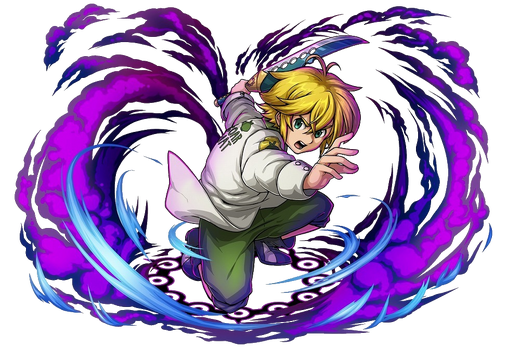 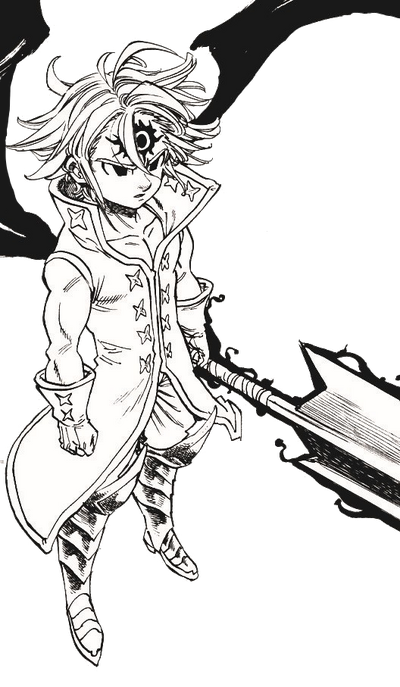 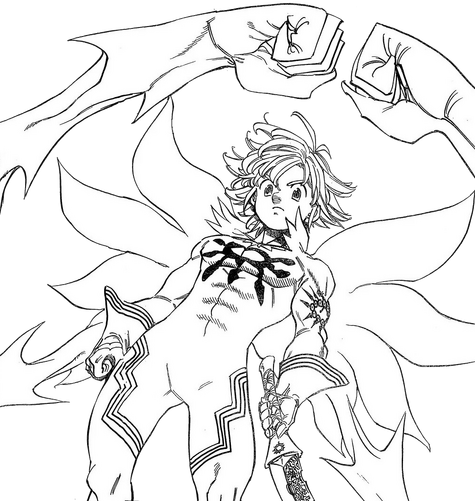 Meliodas is the Dragon's Sin of Wrath and the captain of the Seven Deadly Sins. In the present day, he cheerfully runs the Boar Hat, a bar based on top of a giant pig, serving patrons infamously terrible food along with his brand of liquor. The sin referred to in his epithet is the destruction of the Kingdom of Danafor, done by Meliodas in a fit of rage after his first battle with Fraudrin.

His happy-go-lucky facade belies his troubled past as the firstborn son of the Demon King who betrayed his own race, including his younger brother Zeldris, for the sake of his lover, the Goddess Elizabeth. He was cursed with immortality by the Demon King for his betrayal while Elizabeth was cursed with perpetual reincarnation by the Supreme Deity, and Meliodas has continually loved and lost her countless times over the last 3000 years.

Superhuman Physical Characteristics, Magic, Extrasensory Perception, Expert Swordsmanship, Martial Arts, Darkness Manipulation (Can generate and manipulate solid darkness from his body to form various constructs), Weapon Creation (Can create weapons out of solid darkness), Flight, Regeneration (Mid), Sealing (Sealed Gelda), Attack Reflection (Can reflect magic attacks and amplify them. Meliodas has also shown the ability to reflect non magical Darkness and Lightning), Power Nullification (Can disperse magic attacks), Statistics Amplification (His magic power increases at night), Rage Power (Increased his power with his emotions despite being heavily injured), Telepathy, Air Manipulation (Can make air blades with swords), Aura (Can project a visible dragon-shaped aura with killing intent), Hellfire Manipulation (Purgatory fire nullifies up to Mid-High regeneration), Soul Manipulation (Demons remove and eat souls, destroying them completely), Duplication (Can create weaker clones of himself with Lostvayne), Power Absorption (Can absorb others' commandments, which are demonic curses), Absorption (Can power himself by absorbing the damage he takes), Immortality (Types 1, 3, and 4), Self-Sustenance (Type 2), Resurrection (Returns to life every time he dies after a month has passed), Resistant to the following: Acid Manipulation (Hendrickson stated his Acid power didn't work on Meliodas due to his demonic nature), Soul Manipulation (Despite being a master soul manipulator, Melascula was unable to remove his soul the normal way even though he was heavily injured), Ice Manipulation (Unaffected by Vivian's Freeze Coffin which completely froze through an Earth Crawler), and Telepathy (Drole's Magical Eye could not read his mind), as well as Biological Manipulation (Purgatory transforms both physical and spiritual aspects of beings), Sealing, Perception Manipulation, Poison, Heat and Cold (Lives in Purgatory without being affected by its extreme environment), Paralysis Inducement in his Prime (Was the original holder of the Commandment of "Love")

Stamina: Very high. On more than one occasion he has taken long barrages of attacks from comparable or stronger characters in order to receive as much damage as possible, and kept fighting | Extremely high as the Demon King

Intelligence: Meliodas has shown himself to be an extremely skilled fighter with over 3000 years of experience. He has shown especially skilled swordplay, and he has a number of versatile techniques that he routinely uses in battle

Weaknesses: Formerly lost the capacity for rational thought when succumbed to Wrath. All Demons are vulnerable to Holy Magic, as it breaks down Darkness particles. Note however that high-level demons have shown to take only minor damage from beings near their own level, implying the vulnerability is not extreme. The regeneration used by demons heals injuries but not the "damage" dealt. In practical terms, this has shown to mean that the more a demon regenerates the weaker they get, eventually reaching the point where they no longer have the energy to regenerate at all. Is afraid of using his original magic power

Demon: Meliodas is a high-level demon and can access his demonic biology to give himself a boost in physical ability and various other advantages. Meliodas can activate and deactivate his demon mark at will. At night, his magic power increases.

Power of Darkness: As part of his demon biology, Meliodas can generate solid darkness from his body which he can manipulate and shape as well as project outward from himself. He can use this black matter for a variety of offensive, defensive, and supplementary purposes. One of Meliodas' favored attacks is to create large pillars of darkness energy.

Crushes his opponents under his darkness

Reconnects his arm
Add a photo to this gallery

Immortality Curse: Meliodas was cursed with a type of immortality by the Demon King. He doesn't age physically, and every time he dies his soul enters Purgatory, where the Demon King eats some of his emotions, resulting in an increase in power for Meliodas. His soul then returns to his body and he revives, more powerful than when he died. It is important to note, however, that the revival process takes about a month to complete and so is inapplicable in most combat scenarios.

Soul Extraction and Absorption: Demons can extract souls and absorb them to restore their magic power as well as gain the knowledge of their victim. Both lesser demons and high-level demons have been shown extracting many souls at once from a distance, although some seem to prefer using touch to extract souls. When a soul is eaten it is completely destroyed, removing the victim from the cycle of reincarnation. It is important to note that Meliodas, as the good protagonist, has not used this ability.

Telepathy: Like several other high-level demons, Meliodas has displayed basic telepathy. He spoke directly to Dreyfus, who was being possessed by Fraudrin, and momentarily helped him regain his senses, and he guarded his mind against Drole's Magical Eye.

After returning to his Assault Mode, Meliodas absorbed five of the ten Commandments into himself in order to gain power in the same realm as the Demon King.

Pacifism: Anyone who kills in Meliodas' presence will have their remaining lifetime stolen from them, aging rapidly to death.

Patience: The effects of its curse are currently unknown.

Piety: Anyone who turns their back on Meliodas to flee will be treated as though they committed an act of "treachery" against him, forcing them into obedience to the Demon King and by extension Meliodas himself.

Repose: The effects of its curse are currently unknown.

Selflessness: Those with feelings of greed or selfishness lose their memories, emotions, and sense of self.

Admonition: Meliodas can extract the commandments of others, summon them at will, and absorb them into himself. 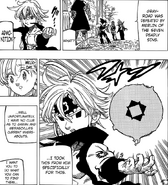 Absorbs five commandments
Add a photo to this gallery

Full Counter: Meliodas can reflect magic attacks back at his opponent with at least double the original power, provided he properly times his counter. Meliodas has shown to be able to reflect several attacks at once, provided they are all coming directly to him. For simultaneous spaced out attacks, Meliodas can take advantage of Lostvayne's clone ability to counter them all at once.

multiple attacks at once
Add a photo to this gallery

to disperse Cain's fireball
Add a photo to this gallery

Powers himself with all the energy from the damage he took

in one concentrated attack
Add a photo to this gallery

Hellblaze: Meliodas can generate the black purgatory fire of the Demon Clan, capable of nullifying the regeneration of "immortals" like Ban. Hellblaze can be coated on Meliodas' body or weapon through Enchant: Hellblaze to enhance his strikes. He can also create fireballs in his hands that explode into large infernos and releases large blasts from his sword. The black fire cannot be put out normally and was able to burn down the Fairy King's Forest despite the Forest being immune to natural fire. 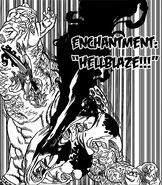 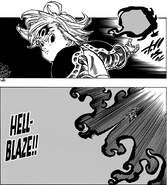 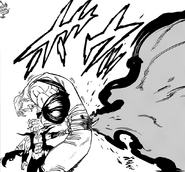 of purgatory fire
Add a photo to this gallery

Releases an aura around himself

and repeatedly slices his opponent
Add a photo to this gallery

Lostvayne: Meliodas' Sacred Treasure is a curved sword far superior to normal weapons. At the same power level, Lostvayne could cut through an Albion with air slashes while a normal blade couldn't make a dent in it.

to counter five spread out attacks

at the same time
Add a photo to this gallery 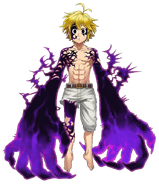 Dante (Devil May Cry (Verse)) Dante's Profile (Anime Dante and Meliodas with Lostvayne and Wrath were used. Speed was equalized)

Eiji Hino (Kamen Rider OOO) Eiji's Profile (Both were at High 6-C.  Meliodas was in his third key and had access to Lostvayne and Demon Mark; Assault Mode was restricted.  Eiji started in his 7-C key.  Speed was equalized and both were in character)

Retrieved from "https://vsbattles.fandom.com/wiki/Meliodas?oldid=7028392"
Community content is available under CC-BY-SA unless otherwise noted.