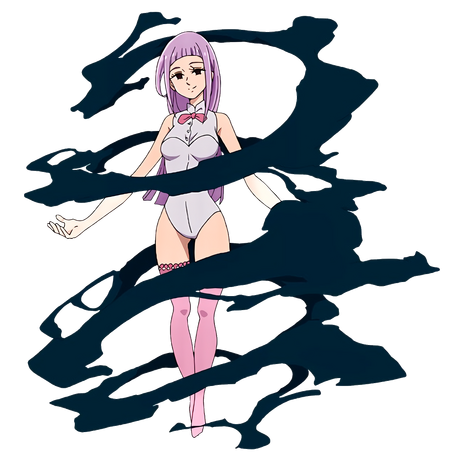 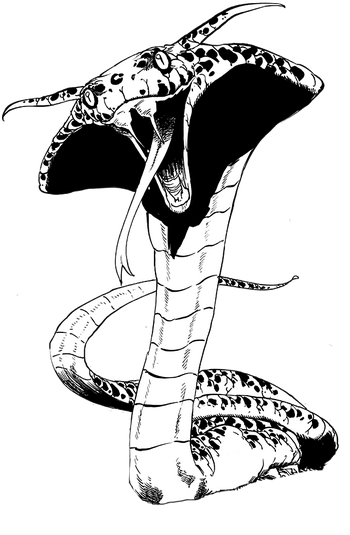 Melascula the Faith is a member of the Ten Commandments, a group of the Demon Clan's most elite warriors handpicked by the Demon King himself. She was sealed away along with the rest of the clan in the Coffin of Eternal Darkness until she was set free by Hendrickson. She displays normal camaraderie with her fellow demons but views humans as inferior lower life forms.

It is revealed that her true form is a snake that was enhanced by the miasma of the Demon Realm over 300 years, turning her into a high-level demon.

Tier: At least 7-B physically, 6-C via Power of Darkness and Snake Form, at least High 6-C with Cocoon of Darkness

Classification: Demon, one of the Ten Commandments - "The Faith"

Attack Potency: At least City level physically (Her physical strength is equal to Gowther's), Island level with Power of Darkness and Snake Form (Her magic power is higher than Base Galand's physical strength. Created a dimensional distortion 100 miles in diameter around Camelot that Merlin could not penetrate), At least Large Island level with Cocoon of Darkness (Post-Timeskip Demon Mark Meliodas could not destroy it, and she freely manipulated his power for her own uses). Her Faith commandment ignores conventional durability.

Speed: Massively Hypersonic+ (Very casually reacted to Hunter Fest Ban after he had taken half of Galand's strength)

Durability: At least City level physically (Had her hearts ripped out by unarmed Ban), Island level with Power of Darkness (Her darkness took no damage from Ban's attacks after he stole half of Base Galand's strength, and they also no-sold the shock wave caused by Critical Over Galand), and Snake Form (Took blows from Post-Training Diane after she powered up with Drole's Dance)

Stamina: Very high. Stayed active after having her entire body covered in third degree burns, and quickly recovered from having one of her hearts ripped out.

Range: Extended melee range with darkness and in her Snake Form. Hundreds of kilometers with magic.

Intelligence: Extremely intelligent. Melascula is a master soul manipulator and necromancer even by the standards of the Demon Clan, and she knows a wide variety of spells that allow her to combat foes stronger than herself.

Weaknesses: Melascula cannot break the rule of her commandment or she will fall victim to it. All Demons are vulnerable to Holy Magic, as it breaks down Darkness particles. Note however that high-level demons have shown to take only minor damage from beings near their own level, implying the vulnerability is not extreme. The regeneration used by demons heals injuries but not the "damage" dealt. In practical terms, this has shown to mean that the more a demon regenerates the weaker they get, eventually reaching the point where they no longer have the energy to regenerate at all.

Demon: Melascula is a high-level demon and can access her demonic biology and powers to give herself a boost in physical ability as well as various other advantages. Note that Melascula always has her demon mark activated. At night, her magic power increases.

Power of Darkness: As part of her demon biology, Melascula can generate solid darkness from her body which she can manipulate and shape as well as project outward from herself. She can use this black matter for a variety of offensive, defensive, and supplementary purposes. Melascula constantly surrounds herself with a cloak of darkness.

Soul Extraction and Absorption: Demons can extract souls and absorb them to restore their magic power as well as gain the knowledge of their victim. Both lesser demons and high-level demons have been shown extracting many souls at once from a distance, although some seem to prefer using touch to extract souls. When a soul is eaten it is completely destroyed, removing the victim from the cycle of reincarnation.

Faith: Anyone who shows faithlessness before her has their eyes set ablaze. "Before her" seems to mean "in the presence of her power" because her commandment was shown activating from long distances away when her zombies caused people to lose faith in their dead loved ones.

Cocoon of Darkness: Melascula envelops and traps her opponent within a pitch black sphere made of darkness. The sphere is resistant to dark energy-based attacks such as purgatory fire, and Melascula can manipulate the energy of those trapped inside for her own purposes, such as for Soul Enhancement - Vengeful Carnage. Her standard usage seems to be appearing behind her trapped victim and removing their soul with a touch. 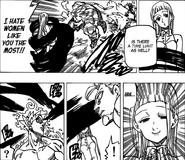 in Cocoon of Darkness

and turned into negative energy

Hell Gate: is a portal creating power possessed by Melascula. It allows her to form portals for various purposes, such as summoning demons and creating dimensional distortions around large areas to prevent others from teleporting in. She corrupted the portal to the Celestial Realm and turned it into a portal to the Demon Realm. 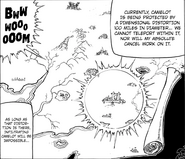 and opens a large portal
Add a photo to this gallery 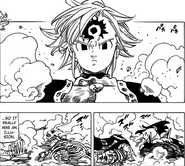 Fooled Meliodas by making a skeleton into Zeldris

Creates large, intimidating illusions of her face to communicate
Add a photo to this gallery

Soul Invitation: Melascula can draw out her opponent's soul after reciting a demonic incantation. This spell is presumably reserved for those that are able to resist normal soul extraction, as Melascula usually simply touches her target to remove their soul. She used this spell on Meliodas after stating he was resisting her.

and extracts the soul
Add a photo to this gallery

Vengeful Soul Revival: Melascula calls back a vast amount of souls that wander Purgatory, granting them renewed life in order to sate their unfulfilled grudges and regrets. The dead are brought back with enhanced physical strength and amplified regret, powered by their rage. When their lingering attachments to the living world are fulfilled, they return to the dead. This spell pairs well with Melascula's commandment, as most people cannot maintain faith in their loved ones when they see their loved ones return from the dead as hateful zombies.

Calls back souls that wander Purgatory

and gives them new strength
Add a photo to this gallery

Melascula's true form is that of a giant snake. In this form she can shift her heart around her body to make it hard to target, expel deadly digestive juices, and becomes much more physically tough than in her normal form.

Deadly Poison: In her snake form, Melascula can expel from her mouth a stream of digestive juices that dissolves her opponent. The substance is corrosive enough to continually halt Ban's regeneration while it remains on his body, and she states that even inhaling its vapors is enough to kill someone. 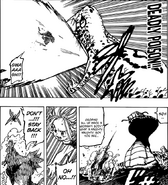 Expels a blast of digestive fluids

onto Ban
Add a photo to this gallery