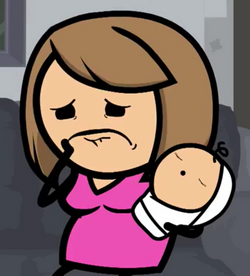 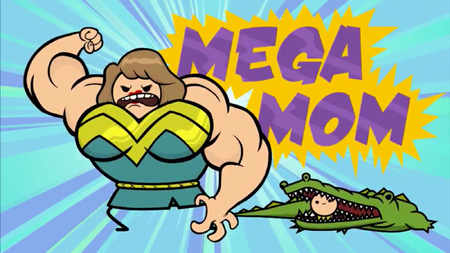 Mega Mom is the wife of Super Dad, who after her husband's demise, discovered she has the ability to transform into a muscular hero whenever her infant son is in danger. She is part of the superhero team known only as "These Guys".

Age: Unknown (Is a widow and mother to a baby)

Powers and Abilities: Empowerment and Transformation/Berserk Mode (Transforms into Mega Mom whenever her son is in danger), Superhuman Physical Characteristics in berserk form, Invulnerability/Attack Reflection (A robber's bullets simply bounced off her body), Electricity Absorption (Could absorb electricity through the rope her baby is attached to in order to grow to immense size) Resistance to Fire (Took the Arsenist's flames point-blank without injury)

Speed: Likely Supersonic (Should be comparable to Shark Rad)

Lifting Strength: At least Class 10 (Stopped a speeding truck), likely higher (Pulled half of a building with a rope)

Stamina: High (Chased the Arsenist across town and fought large groups of heroes for an extended period of time)

Standard Equipment: A long lasso with her baby son tied to it.

Intelligence: Below Average (Relies entirely on brute strength in fights and often deliberately throws her baby into danger in order to transform)

Weaknesses: Relies on her baby being in danger in order to use her powers.

Retrieved from "https://vsbattles.fandom.com/wiki/Mega_Mom?oldid=6045942"
Community content is available under CC-BY-SA unless otherwise noted.