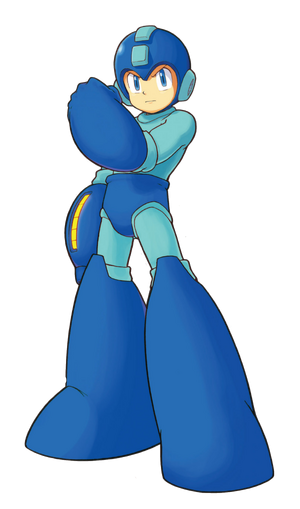 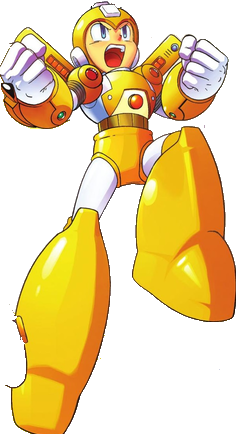 Much like his mainstream counterpart, Rock Light was created to be Dr. Light's helper and surrogate son along with his sister Roll. Just as in canon, Dr. Wily reprogrammed Light's robots to rampage in the former's quest for world domination, forcing Rock to become Mega Man to stop him. However, there are several notable divergences from canon after, such as the threat of Emerald Spears (an anti-robot terrorist group) and his brief bout of megalomania following his acquisition of his brothers' Special Weapons. Nevertheless, he remains the benevolent super fighting robot he is in the main canon.

Superhuman Physical Characteristics, Expert Marksman, Can copy other Robot Master weapons along with basic handheld tools with a touch, Self-Sustenance (Types 1, 2, and 3), Flight via Rush, Energy Attacks, Resistance to Extreme Cold, and Cosmic Radiations, Immunity to Biological Manipulation, Soul Manipulation, and Mind Manipulation (As a robot, he lacks the organs and soul of an organic being, and can't be manipulated through conventional mind manipulation techniques)

Speed: Massively FTL+ (Can draw a bead on Archie Sonic, albeit with difficulty) | FTL | Immeasurable (Vastly superior to base)

Lifting Strength: At least Class G | Class 10 (Can easily lift other humans and large pieces of rubble with ease) | Immeasurable

Stamina: Limitless (As a robot he does not fatigue), though he can be slowed down by continuous damage and lack of sunlight.

Intelligence: Mega Man was originally designed to be a pre-teen boy and lab assistant but has an aptitude for machinery due to his nature as a robot and is extremely experienced to the point that by issue #54 he begins bearing signs of PTSD similarly to a war veteran. An expert marksman and a capable problem solver, but can be a bit reckless.

Weaknesses: He can be somewhat naive at times and doesn't like to fight unless he has to. He can be somewhat cocky at times, especially after acquiring every one of his brothers' weapons (though this is mostly rectified by the Super Adventure Rockman series of events). | Mega Man was initially inexperienced in the use of Chaos Control and needed to be coached by Sonic to use it to its fullest potential.

Note: Worlds Unite Megaman is only exclusive to the alternative timeline of Worlds Unite, which was retconned to the point where it never happened and as such never existed.

M'egga Man.
Add a photo to this gallery