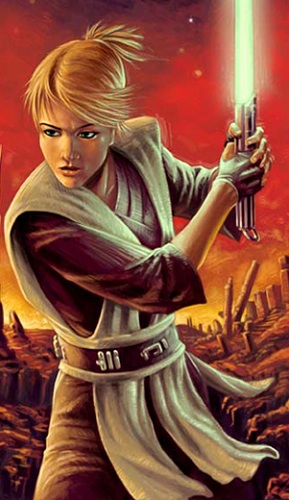 Meetra Surik, also known as the Jedi Exile after the Mandalorian Wars, was a Human female Jedi Master. As a Padawan, she chose to disobey the orders of the Jedi High Council and aid the Galactic Republic in its war against the invading Mandalorian Neo-Crusaders. Rising to the rank of Jedi Knight during the conflict, she served with distinction under the command of her fellow Crusaders Revan and Malak and was eventually commissioned as a General in the Republic Military. Surik played a vital role in defeating the Mandalorians during the latter stages of the conflict, but as a direct result of her controversial actions during the cataclysmic final battle, she effectively cut her connection to the Force. Afterwards, out of all those who went to war, she was the only Jedi to avoid the call of the dark side and return to the Jedi Council to be judged for her crimes. After being exiled from the Jedi Order, she wandered the periphery of known space for nearly a decade before returning to the Republic during the Dark Wars, at the height of the First Jedi Purge.

Attack Potency: Planet level (Managed to defeat Darth Sion, Darth Nihilus and Darth Traya. Was considered to be the greatest of the Jedi's heroes alongside Revan, despite Scourge having just met and been in the position to sense Satele Shan's Force power.)

Lifting Strength: Peak Human naturally. Can be augmented to Superhuman levels with the Force (Was able to move around in Malachor V's artificial gravity well at high speeds). Class G with telekinesis (One of the most powerful Jedi of her or any era. Should therefore be far superior to Padawan Rivi-Anu who, while injured and exhausted, briefly held up a Venator-class star destroyer [a heavy cruiser class warship whose mass should be several to tens of millions of tonnes])

Stamina: Very high (Can also be amplified by the Force and have her endurance augmented for days on end even without nourishment or rest)

Range: Extended melee range in lightsaber combat. Hundreds of meters with telekinesis and blaster shots. At least planetary, potentially galactic with telepathy given the Force-enhanced nature of her powers.

Intelligence: Skilled and experienced enough to be trusted by Revan and Malak to lead a significant portion of the Republic army and naval forces, oversaw the usage of the Mass Shadow Generator at Malachor IV’s use against the armadas of Mandalore the Ultimate, incredibly talented lightsaber duelist and all-around Jedi Knight with years of experience fighting a vast diversity of foes and enemies