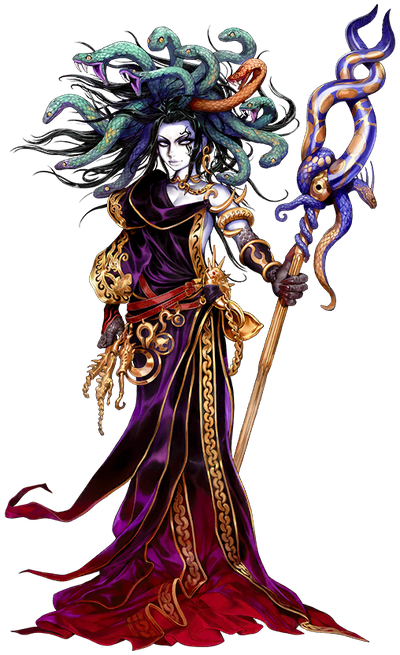 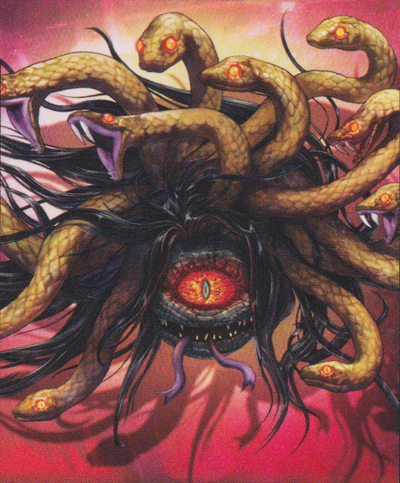 Medusa is the Goddess of Darkness who once ruled Angel Land in peace with her counterpart, Palutena. However, while Palutena adored humanity and wished to see them grow, Medusa despised them and thus began killing and petrifying them indiscriminately while reducing the earth to wasteland. Outraged, Palutena cursed Medusa into becoming a hideous cyclops before banishing her to the Underworld. Medusa swore revenge, launching a sudden invasion with an army of monsters that overran all of Angel Land before capturing Palutena. Although Medusa took steps to cement her rule by stealing the Three Sacred Treasures and handing them to her lieutenants for safe keeping, she did not account for the tenacity of a young angel named Pit, who overcame her forces to take back the treasures and free his goddess, a confrontation which ended with Medusa's death.

She returns twenty-five years later to settle the score, once again taking charge of the Underworld's forces to sew chaos and discord all across Angel Land.

Age: Thousands of years old (she was around before even Palutena was born)

Powers and Abilities: Superhuman Physical Characteristics, Flight, Magic, Immortality (Types 1 and 2), Darkness Manipulation, Teleportation, Petrification, Poison Manipulation, Energy Projection, Shapeshifting, Status Effect Inducement (She can mess with her opponent's motor functions in addition to her petrification and poison abilities), Body Control (Can detach her head from her body and have it act independently)

Speed: Massively FTL+ flight speed and combat speed (Can keep up with Pit while he was amped by the three sacred treasures, landed an attack on Hades)

Durability: At least Island level+, likely Multi-Solar System level (Pit at base can't kill her, he needs the Three Sacred Treasures to do so, was only put down the second time after Hades attacked her in irritation)

Intelligence: A goddess even older than Palutena, Medusa is her counterpart in virtually every way, being cruel, sinister, and a sadist almost to a fault. She is pragmatic in combat, defeating and imprisoning Palutena through a surprise attack and sending her minions at Pit to hinder him during their fight. She is capable in both long-range and melee combat, keeping foes at bay with a variety of energy beams and traps while also being skilled enough to sucker punch Hades, crushing his skull with a single blow. She also has command over vast legions of monsters and even other deities, including Thanatos, the God of Death, Twinbellows, and Pandora, Goddess of Chaos, showing excellent leadership skills and is a keen enough strategist that her forces easily overwhelm the wise Palutena's until Pit arrives on the scene.

Weaknesses: Medusa is somewhat arrogant and a complete sadist, Can't teleport if her legs are bound. She takes extra damage if someone hits her in her real eye (only appears when she is severely injured or angered)