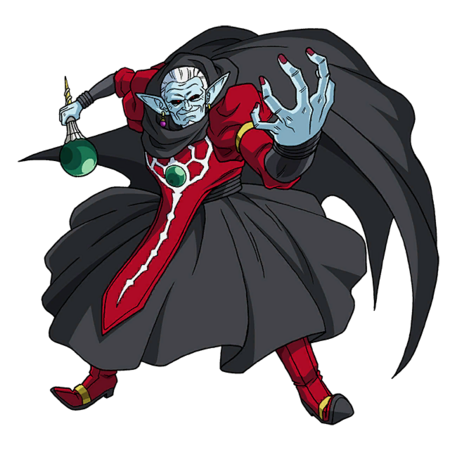 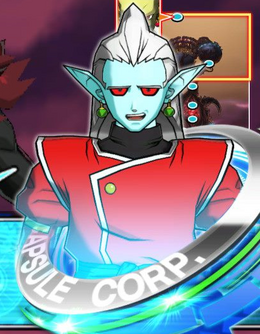 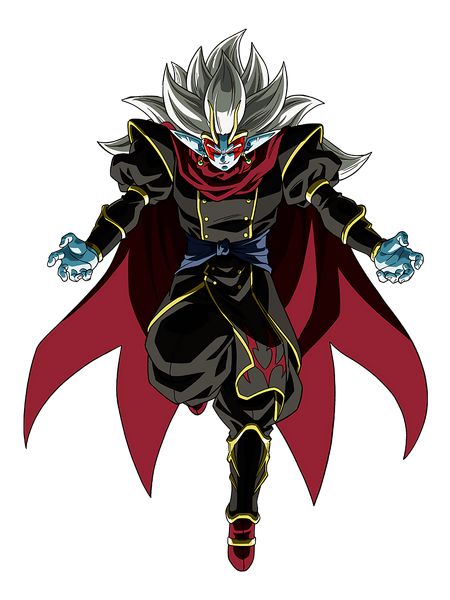 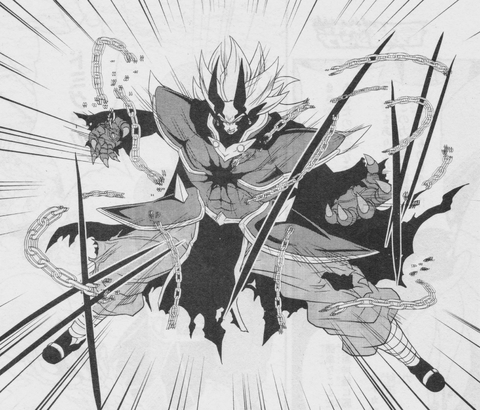 Mechikabura is an ancient evil demon from the Demon Realm who leads the Dark Empire, being described as the greatest evil.

All former abilities to a far greater extent alongside, Demon God Summoning Ritual, Resistance to Sealing (Able to break out of the Time Labyrinth, which seals an enemy outside of time)

All former abilities to a greater extent, along with greater Time Manipulation (Has the power of all of time), Passive Statistics Reduction (His ability Overflowing Dark Energy reduces the energy of his opponent by half at the start of the battle), Regeneration (At least Mid-High, likely higher. Stated to have limitless regeneration hence his regeneration should be superior to Cell then Majin Buu and the entire Majin Race spawn from it), Higher-Dimensional Existence (absorbed/fused with a multitudinous amount of timespaces and his physical body is made up of and contains many timelines), Immortality (Types 3 and 8; Stated that after absorbing time, he had limitless regeneration, and would regenerate no matter what the time patrol tried), BFR, Void Manipulation and passive Absorption (Mechikabura's mere existence was absorbing timelines and would have absorbed the entire multiverse. Stated his absorption is all-consuming and would consume all of light. Sent the time patrol to a void within himself where history appeared as white specks of fog), Abilities he gain by absorbing Demon Gods: Ice Manipulation (Putine absorbed), Electricity Manipulation (Gravy absorbed; can use strong thunder black magic), Reactive Power Level (Salsa and Putine absorbed; can gain power from combat damage given or taken), Limited Body Control and Statistics Amplification (Gravy absorbed), Soul Manipulation and Petrification (Upon absorbing Xeno Dabura and Shroom)

Attack Potency: Multiverse level+ (Viewed Broly Dark, who overpowered Heroes Demon God Towa and was stated to be on par with both Mira and SS4 Xeno Goku, as an absolute non-threat) | Multiverse level+ (Stated that the power of SS4 Xeno Gogeta, who is far superior to Xeno Goku, was "like a baby" in comparison to his own. Chronoa using the power of time failed to defeat him, so she resorted to sealing him away outside the flow of time, but that also failed. Stated to be "the strongest evil") | Multiverse level+ (It was stated that Mechikabura was absorbing the entirety of time and history itself. Timelines were shown inside Mechikabura as white specks of fog. At the end, Mechikabura had successfully absorbed the entirety of time and history itself and nothing existed anymore. Chronoa also stated the time he had absorbed was sealed away with him)

Standard Equipment: Staff | None | None

Intelligence: Extraordinary Genius (Taught Towa everything she knows. Commands the Dark Empire and is adept in multiple fields in science, being more knowledgeable than all other Demon Gods.)

Kars (JORGE JOESTAR) Kars' Profile (True Power Unleashed Mechikabura and Kars with all Stands were used, and speed was equalized)

Retrieved from "https://vsbattles.fandom.com/wiki/Mechikabura?oldid=7019053"
Community content is available under CC-BY-SA unless otherwise noted.