VS Battles Wiki
Register
Don't have an account?
Sign In
Advertisement
in: Tier 9, Tier 9-B, Characters,
and 21 more 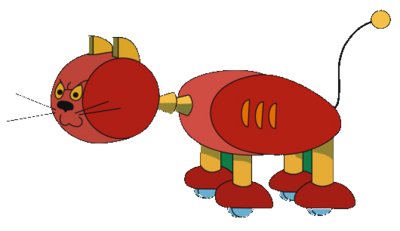 Mechano is a robotic cat and the antagonist of the Tom and Jerry cartoon, Push Button Kitty. It was brought in to replace Tom Cat after he became lazy and gave up on trying to catch Jerry Mouse.

Name: Mechano, The Cat of Tomorrow

Powers and Abilities: Superhuman Physical Characteristics, Inorganic Physiology (Type 2), Immortality (Type 2; Continued to function even after it's body was destroyed and it was reduced to its central processing unit), Self-Sustenance (Types 1, 2, and 3), Weapon Mastery (Has a long variety of weapons that it is skilled with), Enhanced Senses (Could sense Jerry whenever he tried to sneak into the house, realized he was trying to launch himself into the house through a window via slingshot and stopped him with its glove despite not even seeing Jerry preparing to do this, continued to pursue wind up mice after losing its head and thus eyes), Flight via mechanical wings it can produce, Involuntary Possession (After its body was destroyed, its central processing unit flew into Tom's mouth and he swallowed it, causing the CPU to take over Tom's body and make him start acting like Mechano)

Attack Potency: Wall level (Chopped a piano in half and caused massive damage to the interior of the house while chasing wind-up mice)

Speed: Subsonic with Massively Hypersonic reactions (Much faster than Jerry)

Durability: Wall level (Was destroyed by repeatedly charging into walls, though it took several blows)

Stamina: Unlimited (Pursued wind up mice endlessly without stopping, even after it was reduced to its central processing unit)

Range: Standard melee range, up to tens of meters with equipment

Standard Equipment: Small mallet, broom, dustpan, slingshot, tennis racket, axe, a glove on a line it can shoot out of its mouth, small turret, lighter, cleaver, knife, buzz-saw, dynamite it can drop while flying

Intelligence: Low (Can't tell a wind up mouse from a real one and charges and attacks mindlessly even as its body is destroyed by running into walls)

Weaknesses: It will continue to attack mindlessly, even after receiving severe damage to its body, simply charging headfirst while swinging/firing it's weapons, making no effort to avoid crashing into walls and harming itself. It can easily be distracted by mice (real or fake), and while its CPU will continue to function after its body has been destroyed, it poses no real threat until someone swallows it by accident, and even then, it still no longer has its weapons. There is also a remote that can turn it off.