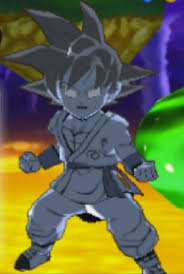 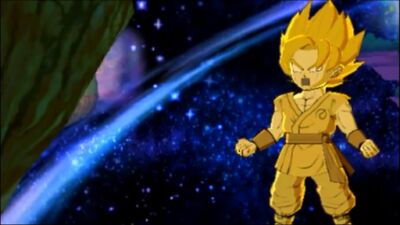 Mecha Goku is a robot created by Bulma to assist in Vegeta's training, it has an appearance and personality that mimics Son Goku, likely to increase the effectiveness of the training. Upon getting serious, it is capable of transforming into Super Mecha Goku, which takes the appearance of a Super Saiyan. Vegeta also uses Mecha Gokus to train Pinich.

Name: Mecha Goku, refers to self as Goku

Powers and Abilities: Superhuman Physical Characteristics, Acrobatics, Flight, Spaceflight, Self-Sustenance (Type 1), Ki Manipulation (Can be used defensively and offensively, to strengthen his skin or to fire ki blasts, which can home in on targets, and form defensive barriers), Transformation (Mecha Goku can enter a state similar to Super Saiyan), Self-Destruction, Possibly Sound Manipulation and Portal Creation (Any character stronger than Buu Saga top tiers should be able to perform the Vice Shout with sheer power, just as any character stronger than Floor 1 Tekka should be capable of opening Timespace holes with sheer power), Resistance to Extreme Cold and Cosmic Radiations

Attack Potency: Multiverse level (Fought and defeated Pinich, fought against Tekka and their postgame team, who are capable of fighting Super Saiyan Blue Goku and Vegeta)

Durability: Multiverse level (Only stopped fighting Tekka and their team because he was hungry)

Stamina: Extremely high (Wasn't at all tired or worn out from fighting Tekka)

Intelligence: Unknown, is likely not very knowledgeable on things unrelated to fighting, but is also likely a gifted fighter, due to being a copy of Son Goku.

Weaknesses: Holds back at the start of a fight, only going all out once they believe they can have a good fight. Leaves the battle when hungry.

Note: Dragon Ball Fusions takes place in the same continuity as Dragon Ball Xenoverse, as evidenced by Towa and Mira, and references to Time Patroller Trunks.