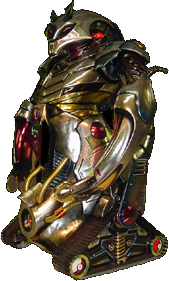 MechaMew2 is a character only seen in the live-action musical Pokémon Live!. It's robotic facsimile of Mewtwo created by Giovanni of Team Rocket. Under the pretext of winning a Diamond Badge, Giovanni challenged trainers from around the world to beat it. His actual goal was to have MechaMew2 see every move so it can learn it and perform it better than the original user, a goal in which he succeeded.

Attack Potency: Planet level (Claimed to be the strongest Pokémon in existence by Giovanni, who had a direct hand in the creation of Mewtwo. Giovanni was also was confident in MechaMew2's ability to defeat his predecessor.). Can ignore durability in a number of ways.

Speed: At least Relativistic+, likely higher (Should at the very least have comparable speed to Mewtwo)

Intelligence: Unknown. Should have at least the combative skills of any other Pokémon, who are naturally hardwired for fighting.