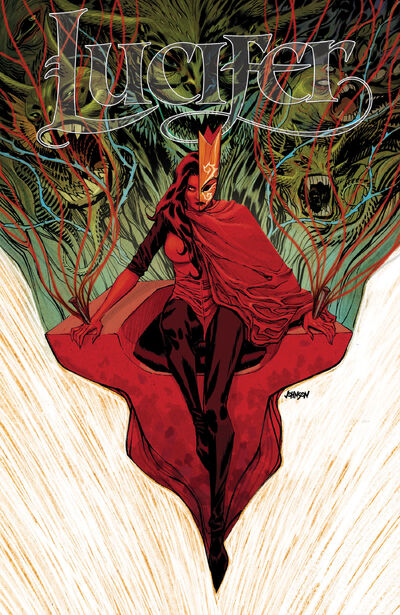 Mazikeen is a character from Vertigo, first appearing in Sandman #22. She is a devoted ally and the lover / consort of Lucifer Morningstar, as well as the War leader of the Lilim, a race descended from Lilith. She is one of the only characters Lucifer appears to hold genuine affection for. Physically, Mazikeen appears as a beautiful dark haired woman, though as a Lilim she can assume any form she desires. However, half of her face is horribly misshapen, appearing decayed and skeletal, with exposed flesh, bones, muscles and brains. More often than not, Mazikeen chooses to hide it with porcelain half-mask.

When Lucifer Morningstar decides to leave Creation behind, he gifts Mazikeen with his powers as The Lighbringer, transforming her into the new Ruler of Hell in a gesture he refers to as "a marriage". Infuriated, she scars Lucifer's face with her sword, and says that if he were to ever heal said wound, he'd be a coward. Lucifer has kept it ever since.

Attack Potency: Unknown (Can hold her own against powerful angels and demons) | Outerverse level (Holds Lucifer's Morningstar powers. Alongside Gabriel, she fought against Michael Demiurgos and the entire army of Heaven)

Weaknesses: At first pinned down to her Throne in Hell, and incapable of understanding and wielding her powers as The Morningstar efficiently. Currently none.

Key: Base | With Lucifer's powers