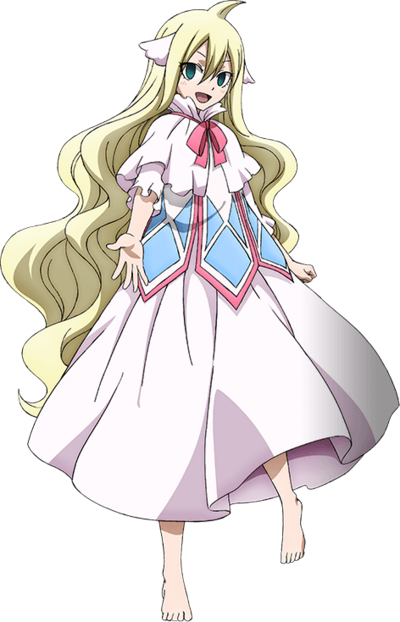 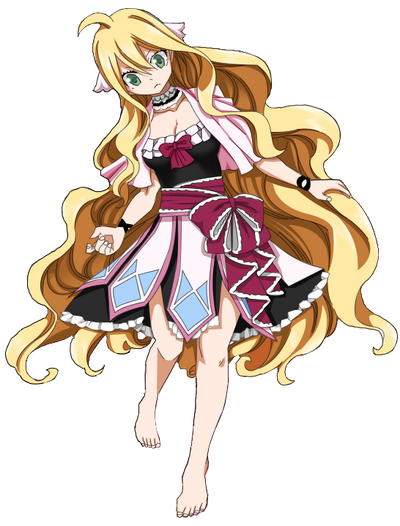 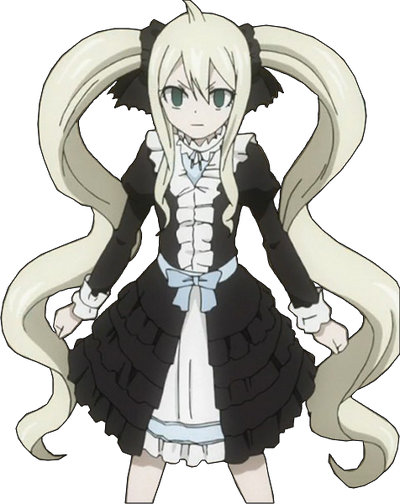 Mavis Vermillion (メイビス・ヴァーミリオン Meibisu Vāmirion) was the first Guild Master and co-founder of the Fairy Tail Guild. Despite her body being comatose and sealed within a Lacrima that has become to be known as Fairy Heart, she continues to interact with the guild and its members as a Thought Projection. Ultimately after a long time of being encased in Lacrima, Mavis' real body is freed with painstaking efforts of Cana and her usage of Fairy Glitter. She is the lover of Zeref Dragneel and mother of August.

Speed: Massively Hypersonic+ (Can keep up with Yuri Dreyar) | Sub-Relativistic (Should be comparable to Lucy Heartfilia)

Range: Several hundreds of meters to several kilometers with ranged attacks and Illusions.

Intelligence: Genius (Can predict battles to the point of nearly showing precognition. Won multiple wars with her strategies)

Illusion Magic (幻影魔法, Genei Mahō): During her time at Tenrou Island, Mavis was self-taught Illusion Magic. Her illusions are so detailed that they appear to be genuinely life-like, and Mavis has used them on occasion to intimidate people, such as by creating fearsome beasts that look deadly and summoning an army of knights.

Tenrou Soldiers
Add a photo to this gallery

Fairy Law (妖精の法律, フェアリーロウ, Fearī Rō): The first of the Three Great Magics of Fairy Tail. Rivaling the power Fairy Glitter, this Magic emits a bright light that envelops the area and inflicts heavy damage on whoever the Caster perceives from their heart as an enemy, leaving friends and bystanders completely unharmed. Zeref taught Mavis this spell to protect her friends and fend for herself. It's stated it takes ten years to master this spell completely and can cause repercussions on the user when done incompletely. Mavis used the incomplete version to save Yury Dreyar.

Law
Add a photo to this gallery

Fairy Glitter (妖精の輝き, フェアリーグリッター, Fearī Gurittā): Fairy Glitter is one of the Three Great Magics of Fairy Tail. It is a Magic that rivals Fairy Law and is a radiance of merciless light that rejects the presence of any foes. It is also an exceedingly complex and unfathomably intricate spell that collects and concentrates the light of the sun, the moon, and the stars. Mavis transferred this Magic to Cana Alberona temporarily.

Fairy Sphere (妖精の球, フェアリースフィア, Fearī Sufia): Mavis used this spell by converting the Fairy Tail members' bonds and faith into Magic Power. It is a Magic that will protect the Guild from any evil; an absolute defensive Magic. However, Fairy Sphere also acts as a stasis chamber, and anyone trapped inside will not age. It's powerful enough to protect Tenrou Island and everyone on it from Acnologia's Dragon's Roar, and to keep it sealed for seven years.

Fairy Sphere
Add a photo to this gallery

Ankhseram Black Magic (アンクセラムの黒魔術 Ankuseramu no Kuro Majutsu): It is a Black Art that allows Mavis to kill any living thing she desires. This Magic seems to be uncontrollable at times, causing it to burst out randomly, killing anything within a certain radius around him. However, when she forgets the value of and no longer cares about, a human life, she can fully control this Magic. Certain Magic Items can protect people from Ankhseram Black Magic, such as Natsu Dragneel's scarf. This Magic also appears, contrary to the nature of the Black Arts, unable to be learned, as Zeref only gained this curse-like Magic by upsetting the ancient God of life and death while Mavis was cursed because of using incomplete Law spell, Ankhseram. The side effect of this Magic is immortality and the inability to age. The user can be killed by another user of that power.

Death Predation
Add a photo to this gallery

Thought Projection (思念体 Shinentai): Due the young girl's real body being in a comatose state inside of Fairy Heart, she is able to create an apparition of herself through this Magic, which she uses to communicate and perform ordinary tasks. Moreover, this projection of hers has a set of ethereal powers, as it can fly at will, as well as walk on water. However, her specific Thought Projection is unique that she can only be seen and heard by people who bear the Fairy Tail insignia, while also whenever her ethereal body is actually damaged, the corresponding effect damages her actual body in the same area/place in conjunction.

Fairy Heart: Fairy Heart is a source of infinite magic energy, stemming from a lingering residual magical source within Mavis due to the Ankhseram Curse. Its magical power potential is claimed to be so high that Mavis herself stated that Etherion could be fired infinitely if its power were to be sourced from Fairy Heart.

Fairy Heart
Add a photo to this gallery