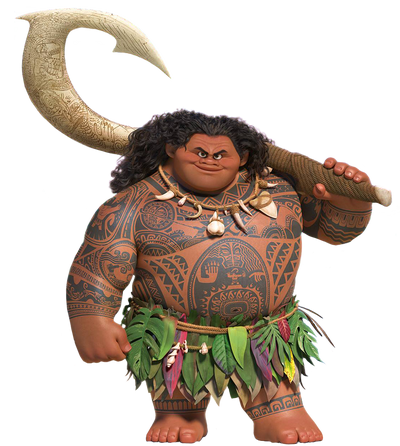 Maui was born to human parents centuries before the events of the film. Disgusted and supposedly wanting nothing to do with their son, Maui was thrown into the sea as an infant and left for dead. He was saved by the gods, who raised and granted Maui supernatural abilities, immortality, and a giant, magical fish hook that allows him to shape-shift. Despite his demigod status, Maui's cruel upbringing would forever scar him. He felt inadequate to humans and used his powers to benefit mankind in any way they pleased as a means to earn the love and validation he was denied by his parents; he pulled islands from the sea to provide them with homes, extended their days by pulling back the sun, and stole fire from the bottom of the earth to provide them with warmth on cold nights, among many feats. As a result, Maui became one of the most acclaimed figures of Oceania history.

Classification: Demi-God, Demigod of the Wind and Sea, Hero of Men and Women

Attack Potency: At least Island level (Maui pulled islands out of the sea, and lifted up the sky), possibly Star level (Dragged the Sun closer to Earth, although it's unknown what size the Sun was according to Polynesian Mythology)

Speed: Superhuman with Subsonic reactions and combat speed, likely higher (He caught the wind. Polynesian islands are constantly hit by hurricanes, with average speeds being 125 mph)

Lifting Strength: At least Class E (He pulled islands from the sea, and lifted the sky), possibly Stellar (Dragged the Sun)

Stamina: Immense (Survived without food or water for 1,000 years)

Range: Standard melee range, at least kilometers (Able to pull islands out of the sea), possibly Interplanetary with his Fishhook (Dragged the Sun)

Intelligence: Above Average. A fairly skilled and experienced combatant, having lived for a thousand years. Maui is an expert sailor and navigator, able to sail an outrigger canoe with relative ease and use the stars to plot the quickest way to any destination.

Weaknesses: Losing his Fishhook will render him unable to shapeshift

Note: Though his most impressive feats have not been shown in the movie, we know that they happened, as he gains a tattoo as proof of his legendary feats. During the movie, he was heavily out of practice, and most likely not able to use the same power he did previously.