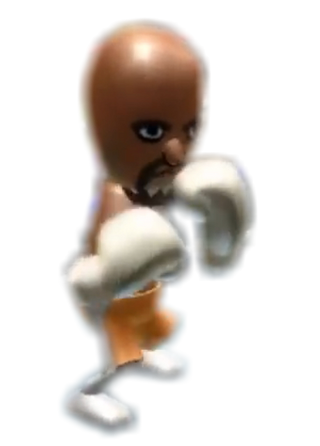 Matt is a non-player character Mii in the Wii Sports series. He is the trainer and champion of Boxing, the referee in Speed Slice, the final boss in Showdown, and a Master Mii in Wii Party.

Attack Potency: Wall level (Hits harder than the player Mii. As the most physically powerful Mii, he should be as strong or stronger than fellow Champions Sakura and Tommy. Stronger than Elisa, who is only the Vice Champion of Boxing. Can deflect a tennis ball that has been hit so hard it left a smoke trail behind it with a single hit.) | Wall level (Far physically stronger than Ryan, who can slice diamonds as big as himself in half, and routinely does the same himself. Can injure the Player Mii in a swordfight and potentially beat him. )

Speed: At least Athletic Human, likely higher (Is the Swordplay Speed Slice referee, and can tell which of two people sliced their sword first even if they both sliced within a fraction of a second. Is the Speed Slice Champion himself, and is thusly one of the, if not the, fastest Miis in the games. On par with the verse's other Champions, if not higher. Casually reacted to this. Can block hits from the player Mii even if they are viewing time slowly.)

Lifting Strength: Class 10 (Threw two large diamonds into the air high enough that they went offscreen, and should be far superior to Ryan, who can do the same despite being one of the physically weakest Miis.)

Durability: Wall level (Able to casually block hits from the player Mii who is powerful enough to break steel chains and launch punching bags across the room. Can take numerous hits from the player Mii even when not blocking. On par with the player Mii, who can effortlessly shrug off being hit in the face by one of Sakura's fastballs) | Wall level (Capable of taking numerous hits around his body from the player Mii’s sword, which can slice diamonds in half. Can casually shrug off the effects of blocking (the Mii potentially hitting him in the face multiple times with a basketball during a game), takes no visible damage from repeated hits to the face with a high velocity ping pong ball. Appears as the final boss of Swordplay Showdown, meaning he is among the most durable opponents in the mode. All Miis can survive this.)

Stamina: Very high, can participate in extensive and rigorous boxing matches even while covered in sweat and can continue fighting after being knocked unconscious several times, can easily go multiple rounds in a swordfight,  everyone who participates in Cycling are capable of biking across the entire circumference of Wuhu Island, though he's not particularly good at the sport itself.

Intelligence: Is the greatest boxer and swordfighter in the world besides the player Mii, and is the only known Mii to be the Champion of two sports at the same time, much less in both Wii Sports and Wii Sports Resort. He has likely kept his Boxing Champion status for many years, as he still had the Champion’s Silver Gloves even back when he had hair. Is also the final boss in Swordplay Showdown, further highlighting his mastery of swordsmanship. Is one of the hardest opponents in Wii Party's Master Mode. Although not the Champion, he is also an exceptional Basketball player and an amazing Ping Pong player. Plays the Güiro in his official Wii Music artwork.

Note: Wii Music, Wii Party, and Wii Fit are considered canon to the Wii Sports continuity, as all these games have the same characters, locations, and NPCs in them.