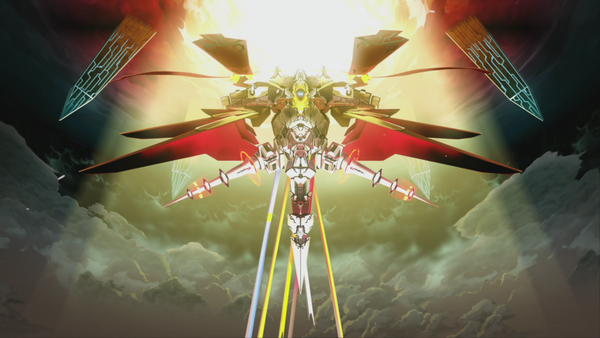 Master Unit: Amaterasu:, also known as the Amaterasu Unit or simply the Master Unit, is one of the three Sankishin that draw power directly from the Boundary. The Master Unit is able to interfere with and alter any event it chooses, allowing it to rewrite the world on a grand scale as the supreme Observer. Because of this, Yūki Terumi and Hades Izanami seek to destroy the Master Unit by any means necessary to be freed from an endless cycle of time.

Age: Beyond time and the multiverse

Attack Potency: Multiverse level+, likely Low Complex Multiverse level (Recreated the timeline during Prime Field War. She can keep the Doomsday going which will turn the entire world, alongside the infinite possibilities, into nothingness. Far superior to a countless numbers of Embryos, one of which, can create Doomsday with its existence. Furthermore, Takamagahara, who doesn't even have Azure, was able to observe Boundary, which is an infinite expanse that transcends time and space and Amaterasu herself is born in the dimension). Able to ignore conventional durability by variety of ways.

Speed: Immeasurable (Can move in Boundary, a dimension beyond space and time)

Stamina: Limitless (Lacks the need of stamina due to her robotic status)

Range: Multiversal+, likely Low Complex Multiversal (Can affect all of realities with her powers)