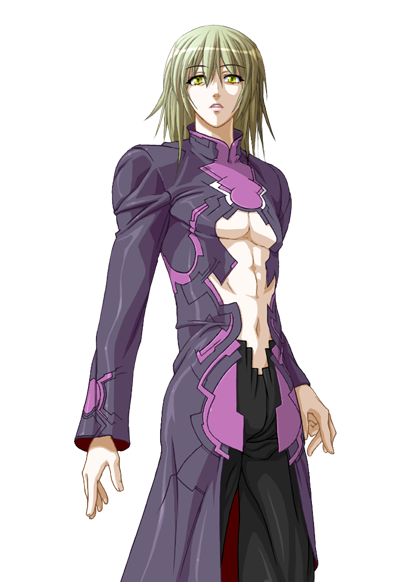 Master Therion (マスターテリオンMasutā Terion) is the current head of the Black Lodge and titled as Grandmaster, this youth with a contemptuous, bored expression cares little about those who cannot match his vast, mystical power, thus allows Kurou to survive their many scuffles so as to provide him a challenge and amusement. Master Therion also controls the Deus Machina Liber Legis.

He is the child of Nero, "the greatest and most wicked magician in the world," and the Outer God Yog-Sothoth.

Name: Master Therion, Domitian (His Anticross name), The Great Beast of the Scriptures, Zs-A-Wia (His name as an Outer God and the true name of Liber Legis)

Age: Countless eons old (Albeit his physical age is somewhat undefined, due to his cycle of rebirths)

Attack Potency: At least Multi-City Block level (Casually dealt damage to an early-game Demonbane with his attacks), can bypass durability via atomic decomposition (Eased every atom in a nuclear bomb to the point where it was erased)

Lifting Strength: At least Class 5 (Comparable to Kurou Daijuuji, who can catch missiles)

Striking Strength: At least Multi-City Block Class (Casually punched an early-game Demonbane a few kilometers into the air, cracking its armor and overwhelming its anti-impact shields)

Range: At least several hundred meters, at least hundreds of kilometers via teleportation, even higher with mind powers (Managed to invade the minds of everyone within Arkham City)

Standard Equipment: Liber Legis, Cross of Sinner, his Grimoire, the "Pnakotic Manuscripts", which are capable of morphing into a girl named Etheldreda.

Intelligence: Genius. An incredibly skilled mage, calculated even his own death and resurrection, countless eons of experience fighting infinite Demonbanes with infinite different abilities and capable of predicting every move the Anticross will make.

Weaknesses: Extremely arrogant with sheer indifference that only seeks for new ways of thrill or enjoyment.

Retrieved from "https://vsbattles.fandom.com/wiki/Master_Therion?oldid=6233067"
Community content is available under CC-BY-SA unless otherwise noted.