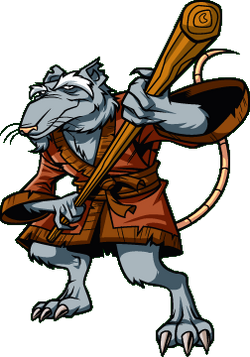 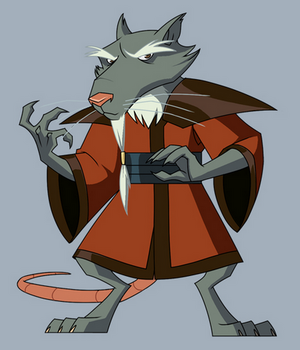 Splinter is the master of the Ninja Turtles. While his backstory changes through incarnations, this specific Splinter was the pet rat of the master martial artist Hamato Yoshi, originally belonging to Yoshi's late love Tang Shen after he fled with the Utroms. He learned martial arts from mimicking Yoshi's fighting style. The two were unfortunately separated when Yoshi was slain by the Utrom Shredder after the former failed to reveal the locations of the other Utroms. Splinter fled to the sewers, and found the Turtles and taught them martial arts not soon after.

Age: Unknown (Can't be too old because he's a rat, but is very old fashioned and old looking)

Attack Potency: Small Town level (Is portrayed as at least as strong as the Turtles. Defeated Drako) | Unknown. Possibly Planet level+ to Large Planet level (Should be capable of matching enemies with comparable durability)

Speed: Hypersonic (Can easily keep up with the other turtles)

Durability: Small Town level (Took hits from The Shredder) | Unknown. Possibly Planet level+ to Large Planet level (Seemingly survived a beat down from the Mystic Warriors with no real injuries, but this may be an outlier)

Standard Equipment: A walking stick which doubles for a staff

Intelligence: Very high (Is a martial arts master, and constantly gives sage advice. Has a lot of knowledge on alien politics. Won a multiversal tournament.)

Weaknesses: Will risk his life for his sons.