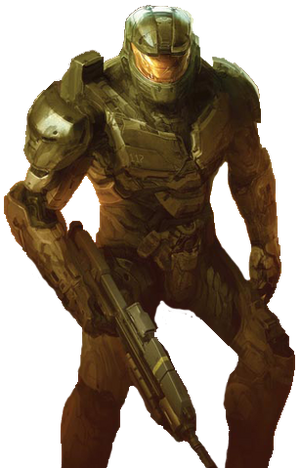 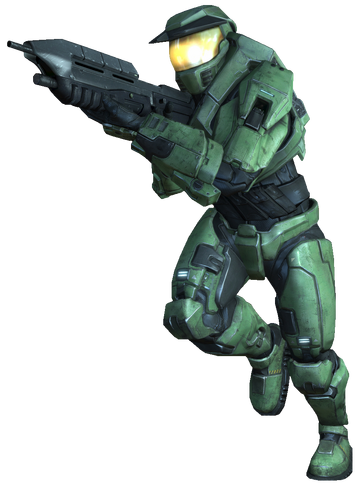 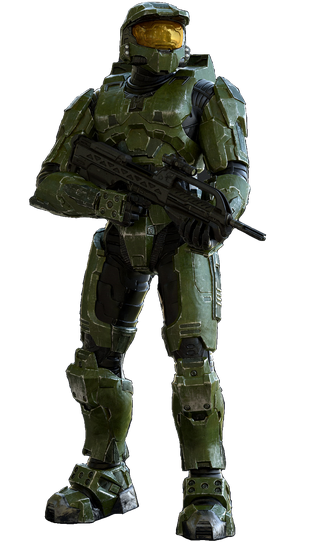 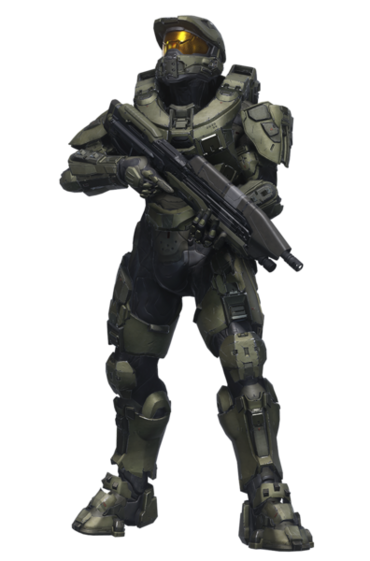 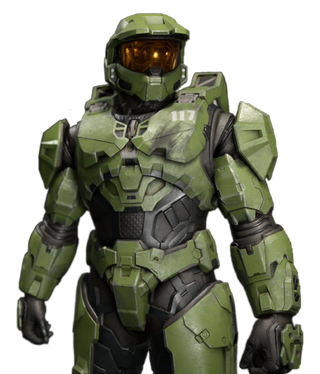 Master Chief (Real name John) is a UNSC Spartan soldier and the main protagonist of the Halo franchise. One of the only Spartan-IIs alive and the hero of the Human-Covenant War. Covertly kidnapped from his home as a child, he was raised from the age of six to be the ideal soldier: fearless, loyal, and resourceful with an unending drive for success. Enhanced with the latest in bio-augmentation technology available, he was one of the thirty-three Spartans to survive the procedures and was the first to utilize MJOLNIR body armor. His figure soon became synonymous with the SPARTAN Program and the UNSC, serving as a beacon of hope to his allies and a monster to be dreaded to his foes.

Name: John (But his surname is unknown, except to Dr. Catherine Halsey and a handful of other people related to the Spartan II Program), "John-117" (A combination of his name and his Spartan Tag), Master Chief (Short version from his title given by the UNSC), Chief/The Chief (Nickname used by various characters), SPARTAN-117 (UNSC Military Designation), Sierra 117 (Phonetic call sign of Military Designation), Referred as "Reclaimer" by Forerunners & Forerunner AI, Nicknamed "Demon" by the Covenant Empire and other Covenant Remnants.

Attack Potency: At least Wall level (Accidently killed two ODST soldiers, and casually kicked a man wearing an exoskeleton comparable in mass to Mjolnir armor 8 meters away, can spar with other Spartans and survive, and is considerably stronger now as an adult) | Small Building level+, possibly higher (Can KO other Spartans and other comparable troops with multiple punches, overpowered an Elite Zealot while extremely exhausted, is capable of killing weaker Sangheili with one punch), Street level to Building level+ with weapons (Arsenal ranges from Handguns to Spartan Lasers) | Building level (His new suit is significantly more powerful than before, is comparable to Spartan Edward Buck who casually killed a Promethean Soldier with a stomp, managed to penetrate the Didact's eye with a knife, but got stomped shortly afterward), Street level to Multi-City Block level with weapons (UNSC weapons are slightly stronger than before, Incineration Cannon is this strong, can get access to various Promethean Weapons), higher with damage powerups and REQ variants.

Lifting Strength: Class 5 (Can deadlift at least 3 times his own body weight, deadlifted 500 kilograms as a test, kicked a man wearing an exoskeleton comparable in mass to Mjolnir armor 8 meters away) | Class 10 with MJOLNIR armor (Comparable to Cal-141 who deadlifted 5 tonnes, dragged a large antimatter warhead around with little effort, casually flips overturned 3 ton Warthog jeeps single-handedly, one Spartan moved a large stone monolith while also fighting back the pain of losing half of his left arm, is somewhat stronger than the average Elite and somewhat weaker than the average Brute) | At least Class 10 (Should be stronger than before)

Striking Strength: At least Wall Class (A 14-year old John accidentally pummeled several ODSTs to death without even realizing it and launched one of them 30 feet with a few punches) | Small Building Class+, possibly higher (Can kill weaker Sangheli with a single punch, who are somewhat comparable to his Mark 5 form, and outwrestled a physically superior Brute) | Building Class (Stronger than before, comparable to Buck, who one-shotted a Promethean Soldier with a curbstomp, is also comparable to Holly Tanaka, who effortlessly smashed through rock this big with a Spartan charge)

Durability: At least Wall level (John, at the age of 14, had the confidence to survive a 30 meter fall with little to no injury | Small Building level+, possibly higher (Can withstand various sorts of human and covenant weapons, can take hits from other Spartans, survived blows from speeding Warthogs and a 2 kilometer fall, survived being somewhat close Scorpion Missile detonation), Building level with MJOLNIR energy shields (Took a direct hit from 343 Guilty Spark's Sentinel Beam; which vaporized a Kig-Yar, can barely survive one hit from Fuel Rod Cannon in MK 5, withstood 6 of them in Mk 6, easily emerged from a large explosion unharmed in his Mk6), higher with Overshield and Deployable Cover (Roughly two to three times stronger than MJOLNIR shields), at least Multi-City Block level with Invincibility (Renders him virtuously impervious to all UNSC and Covenant infantry weapons, this includes Spartan Lasers, Wraith Mortars, and Scarab beam), at least Small City level with Bubble Shield (Repels all projectiles and nearly all explosions outside the bubble shield, withstood a several Megaton Nuclear explosion) | Building level (Took multiple hits from Locke, and an extremely casual Ur-Didact), likely Building level+ with shields (Can take hits from 2 Splinter Grenade sparks before being ionized), higher with Overshield, at least Multi-City Block level with Hard Light Shield (Can repel blows from the Incineration Cannon)

Stamina: Superhuman (Can last much longer on the battlefield than any of the UNSC marines and ODST soldiers, has the pain tolerance to continue fighting even when losing an arm. His stamina is further enhanced by MJOLNIR regeneration; in MJOLNIR he has proven himself capable of fighting with torn tendons in his limbs and even internal bleeding)

Standard Equipment: Master Chief's Mjolnir armor lets him carry two small weapons or one moderate to large-sized weapon in the back, 2 small-sized weapons in his waist, and can carry small-sized weapons in his legs. (Although no Spartan to this date has ever done so). This is thanks to his magnetic weapon holder strips, and he actively uses one weapon or dual-wields two small ones. He can also carry various pairs of grenades (Up to a total of 4 pairs as seen in Halo 3) and even carry grenade triplets (As seen in Halo CE). Most if not all Spartans also carry a knife, mostly use for CQC combat or assassinations.

Intelligence: At least Gifted. As Doctor Catherine Halsey's favorite Spartan, John showed exceptional promise as a leader and soldier even at an early age. A natural leader, he rallied his fellow cadets to heavily injure and incapacitate a group of armed and trained UNSC Marines and steal their Pelican dropship at the age of eight. Since then, John has been trained in all forms of military warfare, being an expert in hand-to-hand combat, firearms usage, stealth tactics, and the operation of any number of military vehicles, being able to kill two elite ODSTs and maim three more when he was just fourteen years old. By the time of the Covenant-Human War, John was a decorated soldier who could turn the tides of battle almost single-handedly, leading UNSC forces to rout entire battalions of Covenant forces, being a key figure who was feared as "The Demon" by his opponents. Also, he gained extensive experience in the usage of Covenant and Promethean weaponry and machinery, oftentimes outdoing the original owners' in their ability to use said weaponry, managing to defeat the Didact's forces even though the Prometheans had spent thousands of years subjugating other civilizations.

Weaknesses: If he gets hit with enough force his armor might lock. Shields cannot regenerate while in the middle of rapid-fire attacks. MJOLNIR regenerating shields grant little protection against close-quarters combat attacks.

John in his early ages in the UNSC.

Master Chief clad in a Mjolnir Mark IV variant similar to his Mark VI armor, as it appears in Halo 4: Forward Unto Down.

Master Chief clad in Mjolnir Mark V armor as it appears in Halo: Fall of Reach. 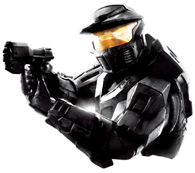 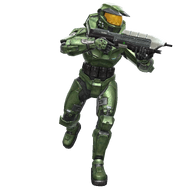 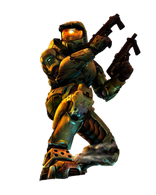 Master Chief clad in Mjolnir Mark VI armor as it appears in Halo 2.

Master Chief clad in Mjolnir Mark VI armor as it appears in The Package.

Master Chief clad in Mjolnir Mark VI armor as it appears in Halo 3.

Master Chief clad in Mjolnir Mark VI GEN2 armor as it appears in Halo 5:Guardians.
Add a photo to this gallery

Space Marine (Warhammer 40,000) Marine's profile (Speed was equalized. Tactical Marine was used and had access to only Bolter/Bolt Pistol and Combat Knife. Chief was in Generation II MJOLNIR armor and had access to his Scattershot and Selene's Lance)