Marisa Kirisame is an "ordinary" human magician specializing in flashy heat and light-based magic, and the secondary protagonist of the Touhou Project. She is a notorious and proud thief and has built herself up as a great magician through nothing but hard work and dedication to her craft.

Powers and Abilities: Superhuman Physical Characteristics, Flight, Magic, Danmaku, Forcefield Creation (Can create forcefields to block incoming attacks, and passively establishes a barrier around her when she's stunned), Light Manipulation, Heat Manipulation, Fire Manipulation, can steal others' techniques, Non-Physical Interaction (Can harm Phantoms and Evil Spirits with her regular attacks), Summoning with Urban Legend, Precognition and Immortality (Type 5) with the Ultramarine Orb Elixir (Removes the user's impurity of death and allows them to see the immediate future by experiencing it, and then reversing time), Resistance to Mind Manipulation (Was unaffected by the true Moon, which can drive humans insane and kill them if they look at it) and Poisons (She naturally resists all the poisons from the Forest of Magic, due to living there)

Speed: Massively FTL+ (Comparable to Reimu and Patchouli. Can fly interstellar distances while fighting numerous fairies in the Dream World) | Speed of Light reactions, possibly Massively FTL+ (if the stars in Mystic Square are real stars)

Stamina: Superhuman (Lives in the Forest of Magic, where the very air is poisonous, without problems)

Range: At least tens of meters with regular Danmaku (Her firing range should be comparable to Sakuya's, who can throw knives at at least 36 meters), Planetary with Master Spark (Commented that her laser would "turn up a few heads on the Earth" when it was reflected by Yorihime on the Moon towards the Earth) to Interplanetary with Magic Space "Asteroid Belt" (This spell card can pull away two large planets).

Standard Equipment: Her broomstick, the Mini-Hakkero, and a variety of potions.

Intelligence: Marisa is an intelligent, skilled magician who works incredibly hard to continually grow stronger. Her mastery of magic is unusual for a human, and she is remarkably skilled at copying the techniques of other magicians and using them for herself. She is also hinted to be a math genius

Magic: Marisa is an average human with no innate abilities, but she has trained herself in magic, using exotic mushrooms as ingredients and her Mini-Hakkero as a power source. The majority of her spells rely on power over finesse and are themed after stars and other astronomical phenomena. Despite her best spiritual affinity being with water, her preferences lead her to rely mostly on light and heat magic. As a result of her research, Marisa is also knowledgeable in explosives. Marisa is an Eastern magician who takes a Western approach to magic, the opposite of Patchouli Knowledge. Many of Marisa's best-known spells are replicas of spells used by other characters that fit her tastes, though she has also experimented with them to create improved versions.

Marisa in the Embodiment of the Scarlet Devil 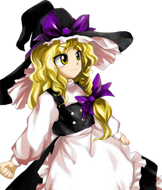 Marisa in Phantasmagoria of Flower View 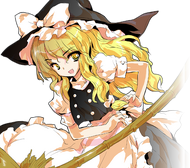 Marisa in Mountain of Faith 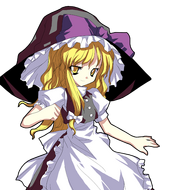 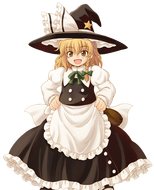 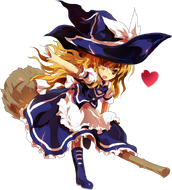 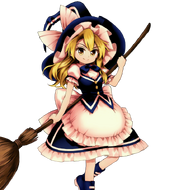 Marisa in Urban Legend in Limbo 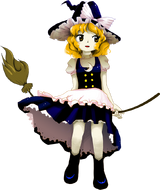 Marisa in Legacy of Lunatic Kingdom 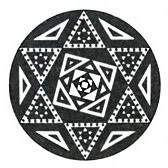 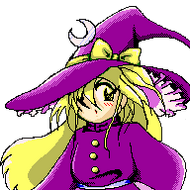 Marisa in Phantasmagoria of Dim.Dream 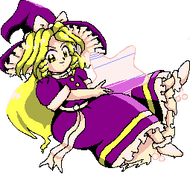 Marisa in Mystic Square
Add a photo to this gallery