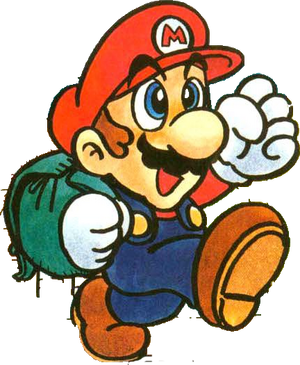 Mario is one of the main protagonists of the Nintendo Power exclusive comic strip, Super Mario Adventures.

Like his original version, he is a fearless hero and masterful at foiling evil plans.

Powers and Abilities: Superhuman Physical Characteristics, Toon Force, Breaking the Fourth Wall (Stopped the issue from ending once), Regeneration (Low; Can heal from being bitten and crashing into walls)

Attack Potency: City Block level (Easily defeated Bowser, who survived the explosion that destroyed a whole tower. Kicked Bowser so hard that he knocked dozens of enemies like bowling pins, sending them flying)

Lifting Strength: Class 1 (Used a lasso and pulled the Koopa Clown Car out of the sky while it was flying at full speed and while Bowser was inside it)

Durability: City Block level (Survived an explosion so big that it destroyed a whole tower and sent him flying hundreds of meters in distance. Survived falling from the cloud layer. Survived being crushed by a Thwomp, which are made of pure stone. Took a Bullet Bill and crashing into a tower with no difficulty)