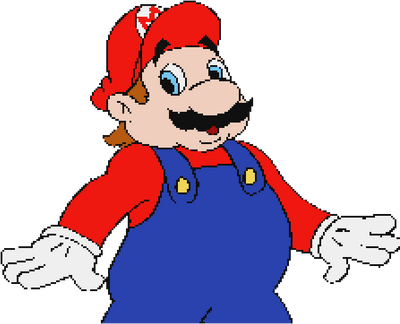 Mario is the main protagonist of Hotel Mario for the Phillips CD-i. In this game, Mario and his brother, Luigi, travel from hotel to hotel to rescue the princess. In each hotel, he fought one of the Koopalings, until finally he defeated Bowser in his castle.

Attack Potency: At least Building level (Can trade blows with opponents who can harm him)

Speed: At least Subsonic (Can dodge Banzai Bills, which should be comparable to cannon fire in speed)

Durability: At least Building level (Should be far more durable than Peach, who survived an explosion that cleared out a cave)

Stamina: Should be fairly high (Fought through several hotels, defeating dozens of enemies inside, without any indication of taking any breaks in between)

Weaknesses: His powerups are lost upon taking a hit