VS Battles Wiki
Register
Don't have an account?
Sign In
Advertisement
in: Characters, Umineko no Naku Koro ni, Game Characters,
and 132 more 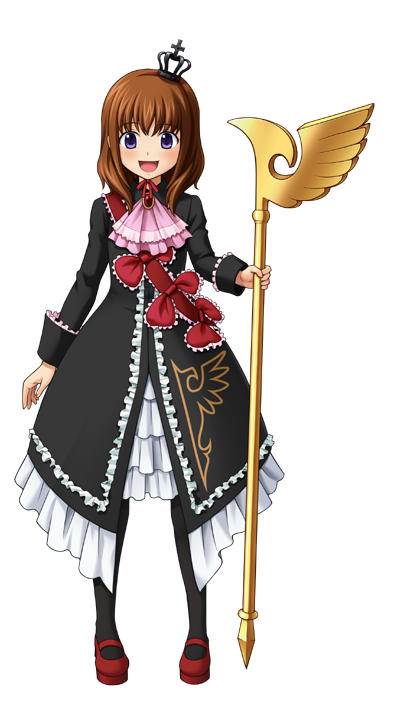 The Witch of Origins, who will live for one thousand years in the future. She holds the motherly magical power to give birth to one (1) from the Sea of Zero. At a glance, this magical power is frail, but no matter how many times you multiply zero (0), it doesn't become anything but zero. It is said that the one that she gives birth to could eventually surpass the heavens. She is loyally protected by Beatrice, who understands her true worth, and is in an alliance with Beatrice. Her magic is to make sweets fall from the sky (sprinkle sugar into water cleansed by the sun and say an incantation), magic to make tomorrow's dinner to be cream croquette, magic to make delicious bell peppers, magic to make the weather good when you go outside.

Age: 9 | Beyond the concept of time

All previous abilities to greater extents, Abstract Existence (Type 1), Reality Warping, Resurrection, Higher-Dimensional Manipulation (Can manipulate Kakera, which contain infinite possibilities and higher dimensions), Shapeshifting, Reactive Evolution and Adaptation (All of the higher layers exist on the background of the Sea of Nothingness, and the beings of the higher layers may exists directly within this sea, and they adapt to the pressure due to mental and spiritual evolution), Avatar Creation, Self-Sustenance (1, 2 and 3), Non-Physical Interaction, Acausality (Type 5. Exists outside the concepts of fate, possibilities, space-time and causality), Large Size (Type 10), Immortality (Types 1, 3, 4 and 8 [Her existence is reliant on Ange]), Regeneration (High-Godly. Even if the entirety of her existence is completely erased and lost to the Sea of Nothingness beyond all layers and stories, she can regain her form just by thinking), Fusionism, Time Manipulation, Spatial Manipulation, Cosmic Awareness, Fate Manipulation, Causality Manipulation, Plot Manipulation, Probability Manipulation (Kakeras are like books and works of fiction to beings of the Higher Worlds, and by using them to create worlds, the world's events and fate is set in stone. Can manipulate the fate, plots, possibilities and space-time of Kakera), Void Manipulation, Conceptual Manipulation (Type 1), Quantum Manipulation, Mind Manipulation and Soul Manipulation (Can manipulate the voids of nothingness of Kakera, as well as it's conceptual, mental and spiritual realms. Lives in the Higher World, were the concepts of fate and possibilities are visualized in the form of Kakera, which she can manipulate at will. Can manipulate the concepts of the Human Domain, which are visualized as physical objects on his level of existence, and can create several concepts on the level of a higher-order world, such as gravity, out of her thoughts), Law Manipulation (Beings of Higher Worlds can create specific rules within their gameboard, such as Beatrice making the Anti Magic Toxin rule), Nonexistent Physiology (Type 2; Their essence beyond the physical form is a void that only takes shape when they think about it), Resistance to Mind Manipulation, Soul Manipulation, Void Manipulation and Conceptual Manipulation (Meta-World beings are defined by their thoughts as a conceptualized form and are able to resist conceptual attacks on their identity to a degree)

Attack Potency: Below Average Human (Is a 9 year old), Island level, likely Moon level to possibly High Universe level with Magic (Although she's weaker than Beatrice, she was part of the creation of Mariage Sorciage, and thus at her peak should have more than a fraction of Beatrice's power. Stated to have gained literally infinite power), Complex Multiverse level within her mental gameboard (Completely and utterly transcended the Human Domain) | Complex Multiverse level (Exists in the Meta-World, a higher realm of existence from which the entire Human Domain is regarded as fiction and its inhabitants are seen as pieces laid on a chessboard, their fates and lives merely small fragments which can be manipulated and physically interacted with even by normal humans inhabiting this perspective. This includes structures such as the Underside of the Chessboard, a void of nothingness completely beyond space and time which resides "nowhere" in relation to the entire world of the pieces) to High Complex Multiverse level (Can manifest in a layer above the Meta-World, in which she stands superimposed over the scenery and perceives events there as frozen in time, as well as the Cathedral beyond both. Can access the Golden Land, which is stated to exist on an even higher level than all of the above, and together with Beatrice can shape it with her thoughts) | Outerverse level (Manifested in the City of Books, which exists on a higher plane of existence than the entire World of Witches and its infinite higher layers of existence, containing countless books and stories, a single one of which could record all of Umineko, with the lives of individual characters taking up little more than a single line) | Boundless (Would reach the Kingdom of God and maintain her will, becoming a Creator Witch and reaching the same level of existence and power as the Creator)

Speed: Supersonic (Fought Kanon and Shanon; even as a human she could outrun Theory Goats for a short period of time). Immeasurable in her mental Gameboard (Surpased the limits of the Human Domain) | Immeasurable (Maria blitzed Meta World Rosa, exchanged red and blue truths with Erika in the Golden Land) | Irrelevant (Surpasses the World of Witches and all of it's infinite meta layers) | Omnipresence

Lifting Strength: Unknown | Immeasurable (Unbound by the limits of the Human Domain, surpassing it's concepts of weight and mass. Can carry Kakera, entire worlds with infinite possibilities, on her hands) | Irrelevant | Irrelevant

Standard Equipment: Her staff and book of spells, Sakutarou.

Intelligence: At least Genius level. Though she often acts immature for her age she is, more knowledgeable about the occult, the Bible, Halloween, and various other things than most adults. She teaches Ange about magic and helps Beatrice with the creation of the Golden Land, whilst her magical items and crafting skills are that of a master. Her piece was able to figure out that Battler and his family were the main culprit of Bernkastel's game after a series of reasoning and conclusions, though it was too late. She has also acted as an intellectual rival to Battler in several episodes, though this was before he became a game master and he was still inexperienced. Learned multiple languages, like english, latin, hebrew and likely more before 9 years old.

Magic of Origins: Maria's primary magical compendium and the one which most distinguishes her from other Witches. It is essentially the power to create something ("1") out of the Sea of Zero, making entirely new things as opposed to simply modifying already existing objects, as other types of magic do. Although her magic is still undeveloped, and on the level of a mere enchanter capable of imbuing souls on inanimate entities and creating magic objects, Maria's special ability makes her destined to transcend the realm of Witches and become a higher-order being, residing on the Kingdom of God, by the Creator's side as the most powerful god in the world.

Truths: Special moves utilized in debates between Witches and Humans taking place in the Meta-World, being statements denoted by specific colors which often manifest as conceptual weapons that directly target the enemy's very existence in an attempt to deny it, and are thus impossible to physically avoid, forcing opponents to counter the attacker's arguments with another truth. As the damage dealt by the Truths is conceptual, rather than strictly physical, they completely bypass conventional durability and allow Maria to skewer and even kill opponents much more powerful than herself.

Weaknesses: Due to her young age, her emotions can overwhelm her resulting in uncontrolled barrages of attacks that can be taken advantage of by more skilled individuals as Kanon showed, and cannot resurrect anything that was denied by their creator. Also noted to be too naive and trusting. She is traumatised due to her mother's abuse. Her magic depends on her faith in it. | She is prone to boredom and the possibility of losing her will, she is dependent on Beatrice, Battler and Ange.