He is capable of retaining consciousness despite the powerful Haki of Shanks, a Yonkou. He has incredible reflexes, as he is able to instantly respond to Kizaru's light-speed movement and attacks to protect Whitebeard. He was also able to touch Kizaru, who is normally intangible due to his Logia ability. This may indicate that Marco is capable of using Haki.

Marco possesses super-human strength, as shown when he kicked Kizaru down to the ground at extreme speed, however it is unclear if it's natural or comes from the fact that he is a zoan-user.

Marco ate a Devil Fruit referred to as a Mythical Zoan that turns him into a Phoenix. This first and foremost gives Marco increased speed and flight, as well as the possibility of launching aerial attacks. Along with being able to transform into a blue phoenix, the fruit allows him to regenerate any wounds with fire. It is a power that is said to be even rarer than Logia. The fruit gave him his nickname: Marco the Phoenix. Marco has more control over his Devil Fruit than any other Zoan-user to date; it's so great that he can change just some limbs while the rest of the body remains human.

Powers and Abilities: Superhuman Physical Characteristics, Master Hand-to-Hand Combatant, Master Haki user (Busōshoku and Kenbunshoku), Transformation (Ate the Bird Bird Fruit: Model Phoenix which enables him to transform into a hybrid man/phoenix or completely into a phoenix), Fire Manipulation (Can control blue fire that has healing abilities in him and in others), Flight, Immortality (Type 3), Regeneration (At least Mid, as he regenerated his head after it was blown to bits by Kizaru), Elemental Intangibility, Natural Weaponry.

Attack Potency: At least Large Mountain level+ (He is one of the strongest Whitebeard pirates. He could briefly contend with the likes of Kizaru and Akainu and sent Aokiji flying with one of his kicks after destroying his ice saber. As a result, he should be equal to the likes of other Yonko commanders)

Speed: Relativistic+ (Moved this fast. Marco was capable of surprising Aokiji and Kizaru on more than one occasion, and could keep pace with the latter off-panel)

Durability: At least Large Mountain level+ (He completely circumvented a punch from Akainu intended to kill Luffy, and took a punch to the face from Monkey D. Garp while only suffering moderate bruising), but his regeneration makes him very hard to kill

Stamina: Very large, possess exceptional stamina and endurance, as he took several laser beams from Kizaru and was still seen standing without showing any signs of being severely damaged (A noteworthy achievement, as he was unable to regenerate duo to Seastone handcuffs), weaker characters were also able to continuously battle for five days

Intelligence: Adept and battle-hardened fighter with decades of combat experience in the feral New World, being the first division commander of the WB pirates means strategic knowledge of warfare and he knows how to lead an armada, keeps his cool so is able to think clearly while still be effective in combat 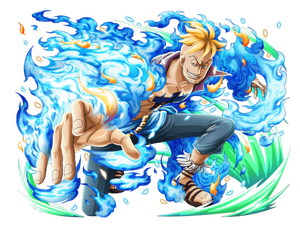 Note: Not to be confused with the character of the same name from Shaman King.

Start a Discussion Discussions about Marco (One Piece)