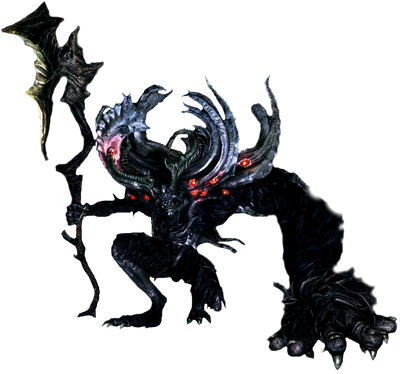 Manus, Father of the Abyss is the final boss of the Artorias of the Abyss DLC for Dark Souls. The source of the darkness plaguing Oolacile, he captured Princess Dusk and dragged the Chosen Undead back in time. Corrupted and driven mad by his own humanity, Manus is implied to be either the Furtive Pygmy or one of the oldest humans to come after him.

Name: Manus, Father of the Abyss

Powers and Abilities: Superhuman Physical Characteristics, Magic (Skilled at casting Abyss Sorceries), Abyss Manipulation, Immortality (Types 1 and 2), Limited Time Travel (Can physically reach hundreds of years into the future), Corruption (Those who are tainted by the Abyss become corrupted, shaped into horrific beasts that are overcome by the dark), Danmaku, Resistance to Magic, Fire, Lightning, Mind, Soul, Dark, Toxin Manipulation and Bleeding effects

Attack Potency: Likely Star level (Should be superior to the likes of Nashandra and comparable to the Chosen Undead)

Speed: Supersonic (Scales to the Chosen Undead, who can dodge and react to Greatbow arrows and bolt traps)

Range: Extended melee range to several meters with melee attacks. Hundreds of meters with magic, potentially Planetary if the Abyss is given enough time to spread.

Intelligence: Skilled and experienced combatant, capable of utilizing all forms of Abyss magic.

Retrieved from "https://vsbattles.fandom.com/wiki/Manus,_Father_of_the_Abyss?oldid=7025669"
Community content is available under CC-BY-SA unless otherwise noted.