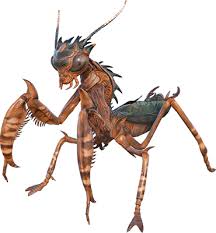 The Mantis is one of many arthropods roaming the ARKs, native to Scorched Earth, it is highly aggressive and will attack anything its size or even larger

Just like the Arthropleura, Pulminoscorpius and Araneo, the Mantis can be tamed, once domesticated, the Mantis' ability to wield tools for harvest/battle makes it one of the most versatile mounts while also being capable of holding its own, albeit not so well against the largest carnivores

Speed: Superhuman, Subsonic leaping speed (Can be outrun by high-end survivors, leaping can cross multiple metres in less than a second) | Superhuman, possibly Subsonic (A speed-trained Mantis will outrun almost any survivor, bar the ones with some form of speed boost)

Intelligence: Extremely Intelligent Arthropod (Capable of tricking humans into a trap by purposely breaking water pipes, their combat abilities and strategies are stated to be on par with those of a skilled human and they can use tools with far more efficiency)