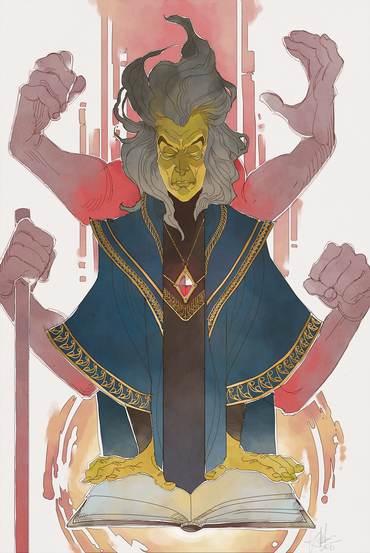 Mankar Camoran is the main antagonist of The Elder Scrolls IV: Oblivion. He is the leader of the Order of the Mythic Dawn, a Daedric Cult dedicated to the worship of the Prince of Destruction, Mehrunes Dagon. Mankar was a staunch follower of Dagon's teaching, and through his unyielding devotion to the Prince would make direct communion with his master, wherein he was gifted with the Mysterium Xarxes - a forbidden tome of metaphysical knowledge penned by Lord Dagon himself. Upon reading the book and unraveling its secrets, Mankar gained newfound enlightenment, learning of Dragon's true purpose and final ambition, and understanding what he perceived to be the real, hidden nature of the Aurbis.

Mankar believes that Tamriel - indeed the whole of Mundus - is in fact a Daedric Plane of Oblivion, namely the Princedom of Lorkhan, whose true name is "Dawn's Beauty". According to him, the Aedra are false god, lesser spirits who betrayed and sundered their master, and thereafter proceeded to pose as divinities in a realm devoid of its guiding light. The Daedra, therefore, are the true gods of the Aurbis, and as Mehrunes Dagon the highest Daedra, so is Tamriel his natural birthright. Mankar founded the Mythic Dawn for the purpose of fulfilling Dagon's ultimate goal: The purification of Nirn through its destruction. He believes that Mehrunes Dagon will cleanse Tamriel off weakness and corruption, shattering the Laws of Convention which bind the spirits of mortals, and finally returning the world to the primordial state of the Dawn, where all will be as gods, with perfect spirits unrestricted by any laws or limitations, unlimited and eternal, and free to act as they will.

Mankar's origins are contradictory, and shrouded in mystery. He is supposedly the son of Haymon the Camoran Usurper and his mistress Kaalys, born shortly after his death in 3E 267. However, at least one source stated that Mankar Camoran has been the leader of the Mythic Dawn Cult for over 400 years, which would make him older than his own father. Furthermore, Mankar's heritage would suggest he'd be a Bosmer, a race which he is visibly not. Although one could simply dismiss the account of his birth as false and believe that he simply isn't the son of the Camoran Usurper, the truth is actually far more complex.

By reading Mankar's own Commentaries on the Mysterium Xarxes, one can learn that he utilized Mehrunes Dagon's relic, his bloody Razor, to "flay himself into new shapes". Through Mehrunes' Razor, Mankar cut his own protonymic - the component tones and syllables of his soul - and rearrange its pieces into a new form. In doing so, Mankar became the architect of his own birth, rewriting his entire history and eliminating all trace of his father's influence on his being. Thus, he ceased to become the Bosmer Mankar of the Camorans, and thenceforth and for all time was reborn as the Mankar of the Stars, Ayleid and Dragonborn, fit to wear the Amulet of Kings and bring about Dagon's vision of the end of Tamriel.

Name: Mankar Camoran, The Mankar of the Stars, The Midwife of the Mythic Dawn

Powers and Abilities: Superhuman Physical Characteristics, Longevity, Immortality (At least Type 1), Enhanced Senses, Magic, Reality Warping (All Magic comes from the act of an individual exerting changes upon reality in accordance to their Will), Spatial Manipulation, Time Manipulation, Matter Manipulation, Soul Manipulation, Sound Manipulation / Information Manipulation (Through Mehrunes' Razor, Mankar can affect the underlying tones which compose the fundamental layer of reality. Through it, he can reshape an individual's Protonymic, the Tone of their Soul which defines their being within the Song of the Aurbis, and rewrite their whole history and being, such as what he did to himself and his children), Fire Manipulation, Ice Manipulation, Electricity Manipulation, Energy Manipulation, Healing, Flight, Teleportation, Telepathy, Telekinesis, Portal Creation, Transmutation, Summoning, Absorption, Magic Barriers, Attack Reflection, Paralysis & Petrification, Curse Manipulation, Statistics Amplification, Status Effect Inducement

Attack Potency: Large Star level (Merged with the Mysterium Xarxes, and through is power created his one pocket plane of Oblivion, Gaiar Alata, and became one with it. Mankar holds complete control over the fabric of Gaiar Alata, and can shape it as he wills, with the plane being large enough to contain a sun and instantly collapsing when he was killed.)

Speed: At least Massively Hypersonic+ (As an incredibly powerful mage, Mankar Camoran should be more than capable of reacting to shock magic and other spells of comparable speed. Should be far above dragons such as Odahviing, who can cross Skyrim in seconds, and should also be much faster than skilled Ansei who can react and swing their swords in microseconds)

Range: Hundreds of Meters to Low Complex Multiversal with Magic (Powerful offensive spells can be used to affect great numbers of enemies across vast distances. Holds complete control over his pocket plane of Oblivion, and can warp it as he wills. Can travel from Nirn to Oblivion almost at will, and have some effect on Nirn even when located within his realm of Oblivion)

Intelligence: Gifted. An incredibly powerful and learned mage with vast knowledge in many arcane subjects and impressive magical skill. Read the Mysterium Xarxes, a book written by Mehrunes Dagon himself containing cosmic knowledge revealed to him by the god Xarxes, and became enlightened on the true nature of the Aurbis. However, Mankar is mad, and quite deluded, and so often has strange and contradictory interpretations of the knowledge he gained.

The banner of the Mythic Dawn 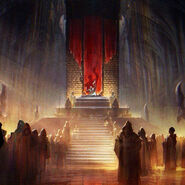 The Gateway to Paradise
Add a photo to this gallery