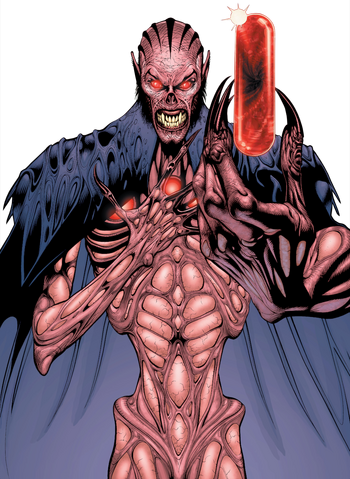 Mandrakk is the corrupted version of half of the original extension of Monitor-Mind the Overvoid that examined the Multiverse before splitting and leaving behind the Thought Robot. Mandrakk locked himself away in the Pit to await the Final Crisis of the Monitors, when he would rise from the abyss and destroy creation. He was defeated following his cataclysmic confrontation with the Thought Robot, falling through the Overvoid and reentering creation, severely weakened, in the Dark Multiverse, where he was chained by Barbatos. He eventually regained some of his strength by feeding on those drawn to him by his siren call, and would have fed on all creation. However, he was altered by the World Forge-granted power of Neon the Unknown, leaving him to feed on the Dark Multiverse for all eternity.

Powers and Abilities: Superhuman Physical Characteristics, Genius Intelligence, Abstract Existence (Type 1), Beyond-Dimensional Existence (Type 2), Large Size (Type 11), Non-Corporeal, Intangibility, Conceptual Manipulation (Type 1), Immortality (Type 10), Self-Sustenance (Types 1, 2 and 3), Reactive Evolution (Continually evolved to counter the Thought Robot's growing power), Flight, Cosmic Awareness (Senses the Multiversal structure), Energy Projection (Can fire eye beams and lightning-like blasts), Plot Manipulation (Eats stories on a creation-wide scale), Telepathy and Mind Manipulation (Can broadcast a siren call to beings throughout creation, causing intense mental pain), Biological Manipulation (Should have the same abilities as Rox Ogama, a much lesser version of him, who turned Ultraman into a vampire), Empowerment (When in a severely weakened, lower-dimensional state, Mandrakk can regain power by feeding on blood), Size Manipulation and Dimensional Travel (Can alter both his scale and pitch, which allowed him to travel from the Dark Multiverse back to Nil)

Attack Potency: Outerverse level (Is half of the extension of Monitor-Mind The Overvoid that examined the DC Multiverse. Exists in the archetypal Monitor world of Nil as the "bad" side of every conceptual dichotomy. Fought the Thought Robot and wounded it beyond repair. Was able to one-shot Zillo Valla, a normal Monitor)

Standard Equipment: Monitor nanotechnology that allows him to interact with the Multiverse while still sealed in his sepulchre. His technology can grow reality-blitzing missiles and possesses enough power to cleanse the Multiverse of all life.

Intelligence: Supergenius (The Monitors, capable of creating technology that operates in concept space to construct universes for the Orrery, considered him smarter than any of them)

Start a Discussion Discussions about Mandrakk the Dark Monitor