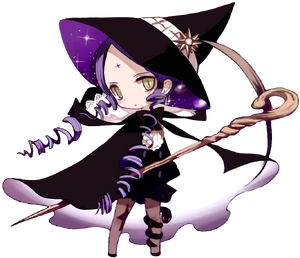 Mana is a character in Arc 3 who isn't a magical girl, but a mage, individuals who wield a large quantity and variety of magics compared to magical girls' one magic, but are much weaker and need preparation. She's a member of the Magical Girl Resource Department alongside her adoptive younger sister, Hana Gekokujou. Mana is a very stressful and distrustful person to most strangers she meets, with a short fuse, often ending up using strong language. As she holds a top position within the Magical Kingdom, she takes her duties very seriously, and is hard on herself, leading to her stressed state. She and Hana team up with 7753, Ripple, and Archfiend Pam with the mission to apprehend a serious criminal.

Tier: 10-B physically, at least 9-A with magic car, at least 8-C with spells, likely higher, possibly 8-A with drugs

Speed: Human normally, At least Superhuman with car, At least Hypersonic+ with drugs (On par with magical girls)

Intelligence: Has good experience as a mage and a member of the Magical Kingdom. Despite her temper, she has the necessary skills to be an investigator and team leader. Isn't a fighter, unless under the influence of Syringes

Weaknesses: As Mana is a mage, she suffers from regular human weaknesses, has a quick temper, and can be prone to pressure; those can be fixed with the use of Syringes. Overuse of syringes will cause nefarious side effects